He has been banned from having runners until Monday's hearing 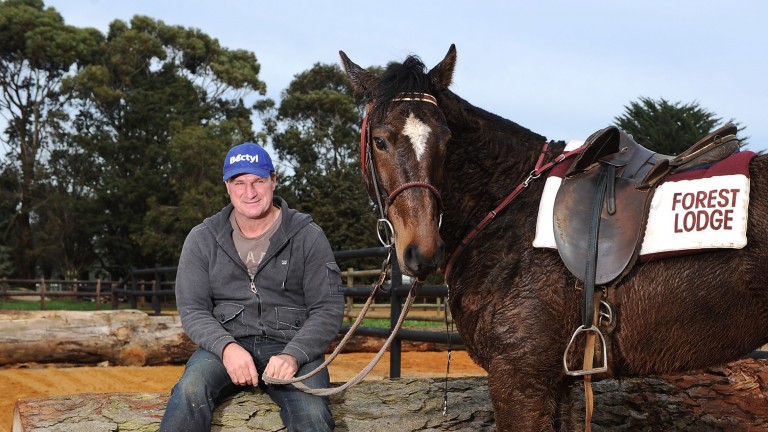 Australia's leading trainer Darren Weir has been charged with six offences by Racing Victoria and banned from running any horses until an inquiry reopens on Monday.

The Melbourne Cup-winning trainer, who has more than 600 named horses in his care, was charged following a Wednesday police raid at his stables, where three 'jiggers' were found, raising concerns about horse welfare and integrity.

Weir was charged with possession of an electric device capable of affecting the performance of a horse, failure to give evidence at an inquiry, failure to comply with a direction of the stewards and conduct prejudicial to the image, interests or welfare of racing.

What is a jigger?

A 'jigger' is the local name for an electronic device, usually used with a whip, and is designed to deliver an electronic shock to the horse in a bid to produce a better performance on the track.

Although no date has been set for the racing appeals and disciplinary board to consider the charges against the three men, the preliminary hearing will resume on Monday. As an interim measure Racing Victoria has banned Weir from running horses, meaning his 27 entered runners were scratched from this weekend's cards.

Racing Victoria also stressed on Friday that investigations are ongoing.

Weir's owners have already started to move horses out of the yard, with Victoria Derby winner Extra Brut sent to Ciaron Maher. Yes Yes Yes and Nature Strip have been switched to Chris Waller and Brave Smash is now to be trained by Kris Lees.

Trap For Fools, who became McLean's only Group 1 winner in his own name when landing the Mackinnon Stakes on the final day of last year's Melbourne Cup Carnival, has joined Robert Hickmott.

Thousand Guineas winner Amphitrite will in future be based at the stables of training partners David Hayes, Ben Hayes and Tom Dabernig.

Racing Victoria executive general manager Jamie Stier said: "The stewards are concerned about the seriousness of the threat posed by Mr Weir’s and Mr McLean’s alleged possession of an electronic apparatus. This is a significant issue in terms of animal welfare and racing integrity.

"The investigation has caused considerable public concern, and has generated considerable negative publicity, bringing into question the impact on the image, interests and integrity of racing of Weir and McLean’s continued participation in racing pending the hearing of the charges.

"The stewards also have significant concerns regarding the negative adverse publicity relating to police involvement in relation to Weir and McLean’s training activities is having on public confidence in racing."

Stier added: "We understand the timing of this order has impacts for owners, punters and race clubs, whom we sympathise with, however in the opinion of the stewards the integrity and reputation of the sport is paramount. In issuing this interim order, it should be noted that investigations are ongoing."

In a Friday evening statement, Racing Victoria chief executive Giles Thompson said: "This is a complex matter and that is why the stewards have taken the time to thoroughly consider the information available to them since Victoria Police executed their warrants on Wednesday and have today made decisions that they believe are in the best interests of Victorian racing.

"I understand that there are innocent parties impacted by this and I am sympathetic to the owners within Mr Weir’s and Mr McLean’s stables that have been affected by the decisions made today, however the integrity of the sport and its reputation must come first.

"I’m also aware that there will be a number of hard-working stable staff that will be concerned about what this may mean for their future. Our participant wellbeing team has reached out to them today offering a range of support services."

Thompson added: "Whilst today’s events are significant, it is important to note that investigations remain ongoing and we will deal with any further information that may come to light. To that end, I would encourage anyone who has information that may be of interest to the stewards or Victoria Police to come forward."

Racing.com reported that Weir on Friday sent an email to his owners via business manager Mick Leonard, who wrote: "Darren is exploring his legal options, however as the matter is subject to ongoing legal proceedings we are unable to comment further at this stage."

McLean's owners received a similar email, which commented on the jigger linked to him and claimed it was for the purpose of loading cattle.

FIRST PUBLISHED 10:36AM, FEB 1 2019
This is a complex matter and that is why the stewards have taken the time to thoroughly consider the information available to them