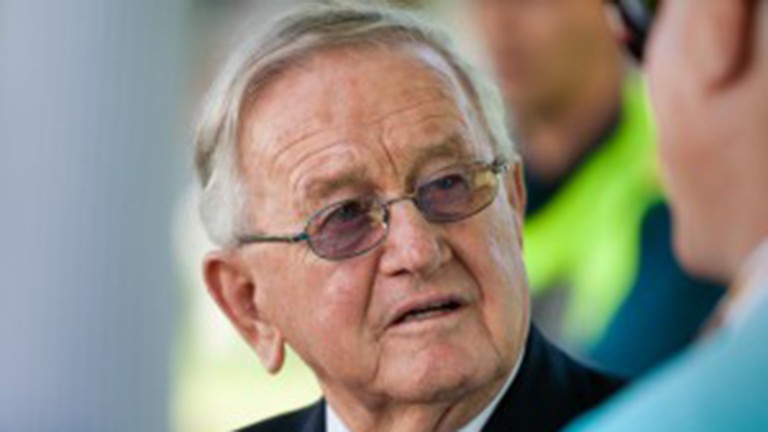 Legendary South African trainer Terrance Millard has died at the age of 89.

The son of a Welsh dairy farmer who emigrated to South Africa after his first wife died of tuberculosis and his second looked like suffering the same fate, Millard was champion trainer seven times, trained the winners of 2,257 races including 117 Group 1s and a record 16 in one season.

He won the country’s most famous race, the Durban July, six times and in 1986 and 1990 he sent out the first three, a feat which has never been repeated. He also won both the Met and the Gold Cup six times.

A successful amateur rider in his youth, Millard took out a licence in 1954 after unsuccessfully trying to get a job as an assistant trainer in England. “I wrote to a lot of trainers and never even got a reply,” he later ruefully recalled.

Millard started with eight horses and struck lucky with a broken winded gelding called Laddie, whom he bought for £25. He could not afford a further £25 for the wind op so he gave a half-share to two veterinary friends in return for the operation.

Laddie won the Queen’s Plate later that year and in his career earned enough for Millard to buy his first house and for the vets to build a veterinary hospital. But it did not all come from prize-money.

“The stakes in those days were so small that you had to gamble,” he said. “I wasn’t a gambler and I didn’t enjoy betting but I was forced to set horses up because that was what owners wanted. They also wanted to see me have a bet to give them the confidence to put their own money down, and some of the early ones I rode myself.”

Millard had some of his greatest successes after moving to Blouberg beach on the northern side of Cape Town where he built a sand gallop that ended uphill.

“The sand by the sea was not reliable because it would not be the same consistency each day but the one I built I firmed up with water and it gave me a wonderful advantage,” he said.

His record of 117 Group 1 wins was bettered by Mike de Kock last year and the eight-time champion trainer paid homage to his predecessor by saying: “Just to be mentioned in the same breath as Terrance Millard is good enough for me. What I remember from his days is that we were absolutely in awe of him.”

Millard decide to retire in 1991 when he was only 61 – “I wanted to give my son Tony a chance” – but after winning two Mets and a Durban July, Millard jnr was offered the chance to train in Hong Kong.

Milard said: “I told him to take it. If you make money there you keep it whereas I’ve known blokes in South Africa going broke even though they were training winners.”

His younger daughter Carol was a jockey for a time and is married to Geoff Woodruff, a successful point-to-point rider in Britain and five times champion trainer in South Africa.

Tragedy struck in 1982 when Millard's elder daughter Jenny drowned while windsurfing off Cape Town and again seven years later when most of his best horses were killed in a road accident on the way back from Durban.

When asked the secret of his success, he said: “I started right down at the bottom and I stuck at it but also I discovered that every horse has a problem. If you can find it, you can maximise his performance.”

FIRST PUBLISHED 4:39PM, NOV 22 2019
Just to be mentioned in the same breath as Terrance Millard is good enough for me. We were absolutely in awe of him