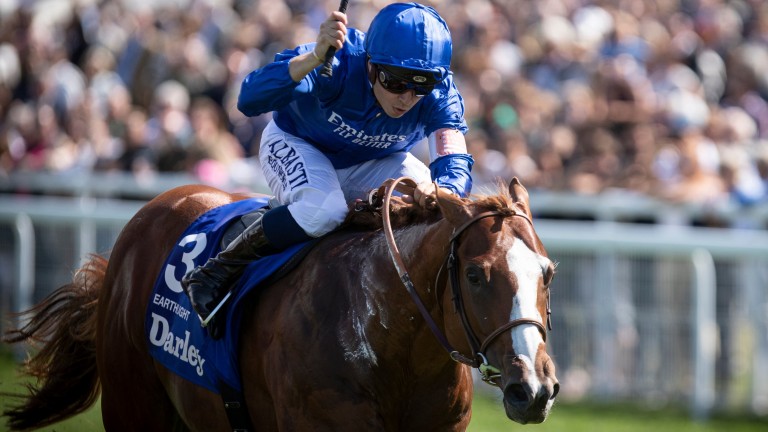 Earthlight: won two Group 1 races as a two-year-old last year but will not run on Monday
Patrick McCann (racingpost.com/photos)
1 of 1
By James Stevens UPDATED 6:37PM, MAY 6 2020

Earthlight, one of Europe's leading two-year-olds from last season, will miss French racing's first day back after being taken out of the Prix de Fontainebleau on Monday.

Unbeaten in five starts last season, including the Group 1 Middle Park Stakes, the son of Shamardal was entered in the Group 3 trial for the French 2,000 Guineas, but his trainer Andre Fabre confirmed he will not be taking up his engagement after spraining a fetlock.

Fabre, quoted on Godolphin.com, said: "Earthlight pulled up slightly sore after work yesterday and upon examination appears to have a fetlock sprain. He will have a couple of easy days and won't run next week."

Earthlight is a 7-2 second favourite for the French Guineas, with stablemate Victor Ludorum the 11-4 market leader, and Fabre is looking forward to seeing his star three-year-olds on the track this season.

The trainer added: "Earthlight has done really well over the winter and we are looking forward to seeing him back on the track soon.

"Victor Ludorum looks to be in good form and has really benefited from the fine spring. He will run in the Prix de Fontainebleau."

Racing returns following the coronavirus pandemic on Monday with a ten-race card – four of which are Group-level events – and the star name is last season's Prix du Jockey Club winner Sottsass.

The four-year-old is on course to begin his campaign in the Prix d'Harcourt and is a top-priced 8-11 with bet365 to make a winning return for Jean-Claude Rouget.

Elsewhere, the Prix de la Grotte is sure to provide plenty of Classic clues with the top two in the French 1,000 Guineas betting, Tropbeau and Khayzaraan, lining up.

FIRST PUBLISHED 4:00PM, MAY 6 2020
Earthlight has done really well over the winter and we are looking forward to seeing him back on the track soon