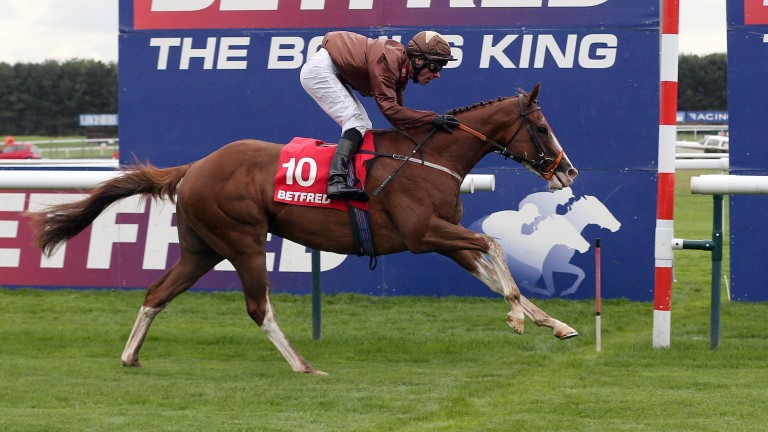 Top Notch Tonto: warms up for Betway Lincoln at Wolverhampton on Saturday
John Grossick
1 of 1
By Bruce Jackson 10:33AM, MAR 7 2017

Top Notch Tonto, one of the flashiest horses in training with his long white stockings, is set to get his first taste of the all-weather in front of the ITV4 cameras at Wolverhampton on Saturday.

The seven-year-old is due to run with fellow Betway Lincoln-entered stablemate Dream Walker in the sunbets.co.uk Lincoln Trial, which could also feature last year's first and second Keystroke and Supersta, who are among 25 entries for the £50,000 handicap.

Top Notch Tonto, the highest-rated entry with his mark of 105, is set to be ridden by stable apprentice Ben Robinson, who will be able to claim 7lb off the top weight.

Trainer Brian Ellison said: "He seems in fairly good form but will need the run. I also need to get a run into Dream Walker, as both need to get running to go for the Lincoln, which is the plan. Ben rides him a lot at home and will ride him on Saturday."

Robinson has had his licence for just under a year and has ridden ten winners, with four coming this year.

He takes over on Top Notch Tonto from Ben Curtis and Silvestre de Sousa, who is booked to ride Supersta for Mick Appleby on Saturday.

Top Notch Tonto, runner-up to Olympic Glory in the 2013 Queen Elizabeth II Stakes at Ascot, had his season curtailed with a leg injury after finishing second at Galway in August.

Keystroke also has an entry in the sunbets.co.uk Listed Lady Wulfruna Stakes on the same card and also on ITV4.