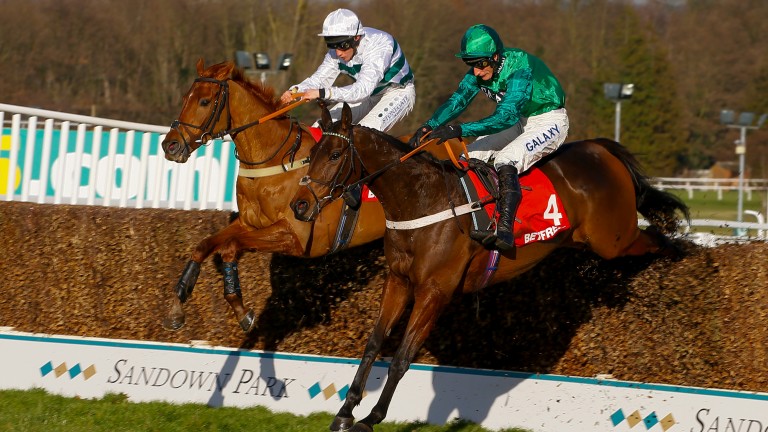 What Top Notch lacks in size he more than makes up in heart as he proved with an accurate round of jumping to run out a comfortable winner of the Grade 1 Scilly Isles Novices' Chase.

A former high-class hurdler, Top Notch had exceeded expectations in his new discipline with three wins from four starts and took his form to a new high with a career-best performance over fences.

Victory provided owners Simon Munir and Isaac Souede – and their retained rider Daryl Jacob – with a third straight success in the race following on from Bristol De Mai and Gitane Du Berlais.

With Amore Alato and Baron Alco fighting out the lead for much of the contest, the strong pace knocked much of the field off their stride, but not Top Notch, who was neat and nimble over the fences and full of running turning from home.

Baron Alco was bravely still in there pitching at the last yet he had no answer to the 11-4 winner, who is fast becoming one of Nicky Henderson's favourites.

"You just have to love him as he tries," said the trainer, who was landing a fourth win in the race in the last eight years. "His jumping when he started over fences was okay but he doesn't have the scope. You could see him growing up and now he was able to wing around Sandown.

"He loved the two and a half miles, so that answered a lot of questions. It would have to be the JLT now. He got the trip well and the extra distance gives him that bit more chance to jump as well."

Top Notch, second in the Triumph Hurdle and fifth in the Champion Hurdle at the last two Cheltenham Festivals, was cut to 8-1 (from 20) by Betfair and Coral for next month's JLT Novices' Chase.

With stablemate Buveur D'Air, originally lined up for this race before being switched to hurdles, passing his Champion Hurdle test with flying colours, it was a highly satisfactory end to a week of twists and turns for Henderson.

Paul Nicholls suffered differing emotions as Le Prezien finished third and Clan Des Obeaux, backed into 13-8 favourite, was virtually pulled up near the finish as he trailed home last.

"Le Prezien didn't jump well enough," said the trainer. "Clan Des Obeaux was disappointing but I'm also not convinced that's his ground. Some of ours are also running shocking at the moment. It's that time of year."

Gary Moore gained much more encouragement from the performance of runner-up Baron Alco and was also pointing the way the festival.

"He ran a good race but he's a solid horse, so he always does," he said. "We could look at the two-mile-five handicap (Brown Advisory & Merriebelle Stable Plate Handicap Chase) at Cheltenham."

FIRST PUBLISHED 2:39PM, FEB 4 2017
You could see him growing up and now he was able to wing around Sandown