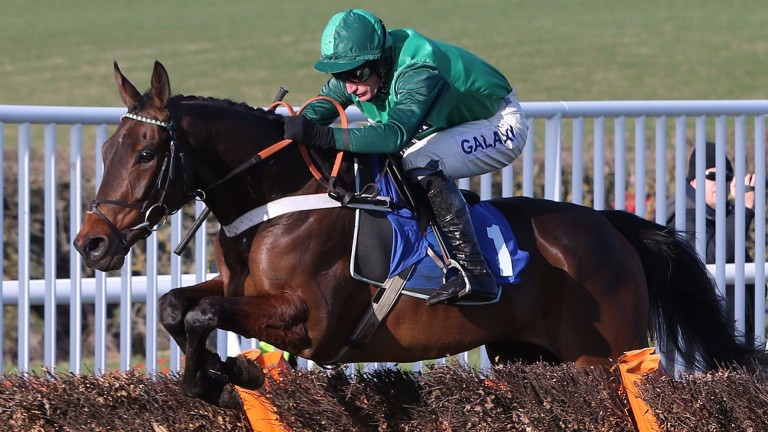 Top Notch will attempt to make the most of his previous chasing experience when he takes on three opponents who are jumping fences in Britain for the first time.

The form of his Uttoxeter run, in which he was beaten less than two lengths, was franked when the second, Le Prezien, won the Racing Post Arkle Trial at Cheltenham, but Top Notch has to give 5lb and more to his rivals here.

Trainer Nicky Henderson said: "He ran very well first time, which turned out to be a good race when the runner-up came out and won at Cheltenham, and I think the winner goes for the Henry VIII Novices' Chase.

"He had a nice run round Warwick, where he jumped very well. He loves soft ground so the conditions won't be too much of a problem."

Le Prezien's trainer Paul Nicholls uses the race to give a chasing start to Romain De Senam, who was touched off in second in a head-bobbing finish to the Fred Winter Hurdle at the Cheltenham Festival in March. As a four-year-old he receives nearly a stone from the year-older Top Notch.

The trainer said: "He's coming out now only because he had a wind operation a bit later than some of the others. He's had three months' good strong work. He will just improve a bit for the run but is ready to roll now.

"It is quite tough for four-year-olds in their second season over hurdles if they have quite a high mark because they get no allowances. He's more a chaser than a hurdler so we thought we would take our chance now.

"Top Notch will be no pushover because he's race fit and has had experience, but we get a handy 12lb from him."

The Harry Fry-trained Overtown Express won two novice hurdles last term but was well behind Le Prezien when they met in the Grade 2 Premier Kelso Hurdle, while Listed hurdle winner Polkarenix has had plenty of racing experience but was tailed off in his only chase in France before his purchase by JP McManus.

His trainer Brendan Powell said: "It's quite warm for a four-runner race. I was hoping to run him in a handicap at Ludlow but it is a 0-135 and they have put him on 137.

"He's a lovely looking horse who we've had for a couple of months. He has done a fair amount of schooling and jumps well. He won a Listed race in France and is probably a two-and-a-half-mile horse, but I want to get him out onto the track and see what we've got. I hope he has a nice future."

FIRST PUBLISHED 6:00PM, NOV 27 2016
He had a nice run round Warwick, where he jumped very well. He loves soft ground so the conditions won't be too much of a problem