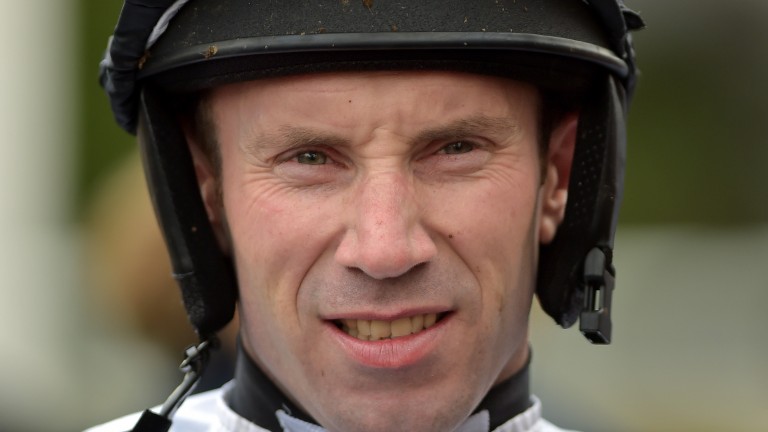 Wayne Hutchinson: has decided to quit the saddle with immediate effect
1 of 1
By Graham Dench UPDATED 6:57PM, OCT 28 2019

Wayne Hutchinson shocked the jump racing world on Monday as he announced his retirement from the saddle with immediate effect, bringing to an end one of the most enduring partnerships in the modern era of the sport.

Hutchinson, 38, joined Alan King when he was 21, and he has been there ever since. He was a long-time number two to Robert 'Choc' Thornton, and he moved seamlessly into the number-one slot when Thornton retired through injury in 2015.

He rode more than 800 winners over jumps, plus 11 on the Flat, and he enjoyed his most successful campaign ever last season when notching up 88 wins, including the bet365 Gold Cup at Sandown on Talkischeap, trained by King. His Grade 1 winners L'Unique and Balder Succes (two) and Cheltenham Festival victors Oh Crick and Medinas were all trained by the master of Barbury Castle as well.

Hutchinson said: "It just seems the right time. I'm rising 39 and I've accomplished more as a jockey than I ever thought I would. I've ridden a lot of very good horses and I've met a lot of great people, and I've also just had the best season of my entire career.

"I missed a couple of months in the summer after breaking a bone in a hand schooling, but I came back and rode a winner on my first ride back when Scarlet Dragon won the Listed handicap hurdle at Market Rasen at the end of last month. He was my last winner as it turns out, but I'm fit and well and I could ride again tomorrow if I wanted. I'm immensely proud to be going out on my own terms."

Hutchinson, whose elder son Callum is with Andrew Balding and will shortly begin a course at the National Horse Racing College in Doncaster, had his first job in racing when apprenticed to Mark Usher, and he switched to jumping when he got too heavy for the Flat.

He said: "I first went to Mark in the school holidays when I was 14 and joined him as an apprentice the day I left school. I rode ten Flat winners with him [his 11th was in a jump jockeys' Flat race] before joining Stan Mellor and then Jeff King in their last seasons.

"Both were great mentors to me, and if I was still a bit soft when I joined Jeff he certainly toughened me up. When Jeff retired I joined Alan, and I've been there ever since."

He added: "I rode my first big winner when Halcon Genelardais won the Welsh National in 2006, and my first Cheltenham winner on Oh Crick in the Grand Annual of 2009.

"I've had lots of great wins since, and they've all been special, but if I was to single out a few besides the Grade 1s on Balder Succes and L'Unique I guess they would be Godsmejudge in the Scottish National, in part of course because of what it meant to Alan as a proud Scot, Smad Place in the Hennessy, and what turned out to be my last big one on Talkischeap in the bet365."

Hutchinson, who was keen to thank agent Chris Broad and his wife Jane for their constant support through 20-odd years, said he only began thinking of retiring about ten days ago and sat down with King straight away. He said: "Alan has been the most wonderful boss and the most loyal of men. I can't thank him enough for all of the opportunities he's given me.

"It came as a surprise to him when I dropped the bombshell, but he understood and just told me not to rush, and to spend a week thinking it over."

Hutchinson's mind was made up, however, and he is already taking advice from Jets (Jockeys Education & Training Scheme).

Looking to the future, he said: "I'm going to take a bit of time off to regroup and to look at my options. Racing has been my life, and it's given me so much joy and pleasure that I'd be happy to give something back by staying within the sport, but I'm very open-minded about the future and my next chapter could equally be outside the sport."

FIRST PUBLISHED 3:06PM, OCT 28 2019
It just seems the right time. I'm rising 39 and I've accomplished more as a jockey than I ever thought I would