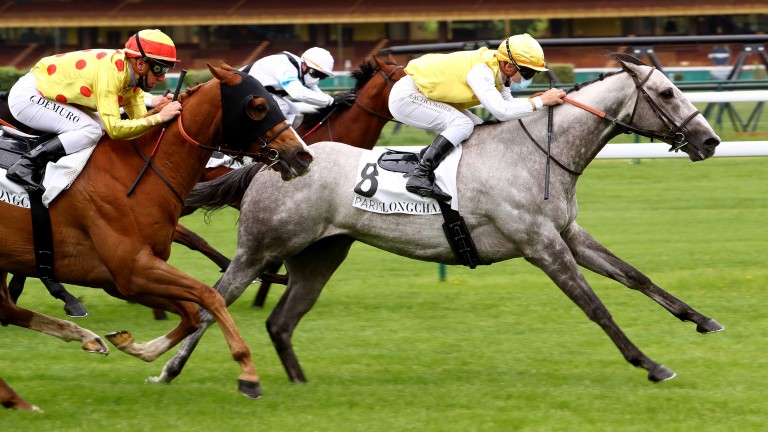 Guyon kept the Philippe Sogorb-trained runner in a handy position on the outer in the curtain-raiser. He made his challenge on the front two, Ken Colt and last year's winner Sestilio Jet, in the final two furlongs and quickened into a lead.

He then held on bravely in the final few yards to hold off the fast-finishing Gold Vibe.

Guyon, equipped with a blue face mask, punched the air after victory in the sprint, his 34th winner this season.

"The first half of the race went well and I was able to take a lead off Ken Colt before asking him [Batwan] gradually for his effort. He was brave at the end there."

A return to Longchamp for the Group 1 Prix de l'Abbaye on Arc day is Batwan's key target for the season, according to his trainer.

"I'm delighted with that," added Sogorb. "I always had a bit of trouble training him at two and three and he had a bit of temperament about him.

"Gelding him [at three] and, above all, dropping back in trip has been the key to him. We sent him for a holiday at his owner Monsieur Pariente's farm for six months last year and he has come back a much stronger horse.

"I think he has the turn of foot to be a very good sprinter. In terms of his programme it's easy. He'll run in the Prix du Gros-Chene, then come back in the autumn for the prep race [Prix du Petit-Couvert] and then the Abbaye."

How to watch, bet and find the winners: your guide to enjoying the French action

Racecourse guides: essential insight into the French tracks in action

FIRST PUBLISHED 10:16AM, MAY 11 2020
Guyon, equipped with a blue face mask, punched the air after victory in the sprint, his 34th winner this season