Too Darn Hot to miss 2,000 Guineas as Gosden team run out of time 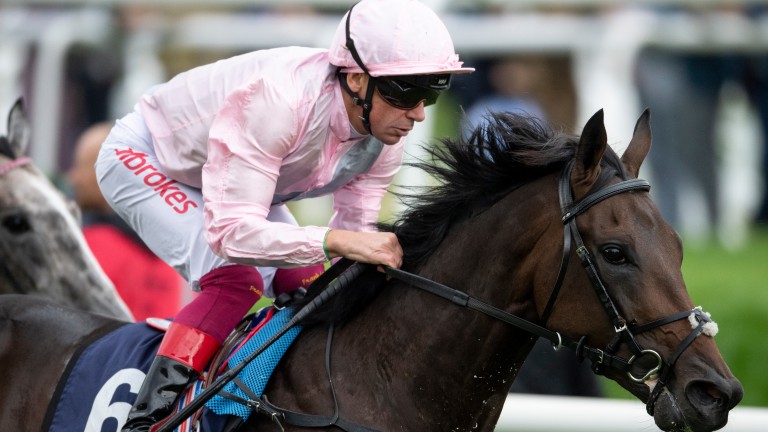 Too Darn Hot: had been favourite for the Newmarket Classic
Edward Whitaker (racingpost.com/photos)
1 of 1
By David Milnes UPDATED 7:09PM, APR 20 2019

European champion juvenile Too Darn Hot was on Saturday ruled out of the Qipco 2,000 Guineas by trainer John Gosden.

The colt had been a warm ante-post favourite for the first Classic of the season at Newmarket on Saturday week, having won all four of his starts last year culminating in a dazzling Dewhurst victory.

However, he was a late scratching from last weekend's Greenham Stakes after a splint problem surfaced following his final pre-Newbury spin and he has been confined to light exercise since.

While reporting on Saturday that the situation was much improved, Gosden revealed he would not have enough time to ready Andrew Lloyd Webber's colt for the 2,000 Guineas.

He said: "Although he's shown great improvement in the last nine days, Too Darn Hot will not be ready in time to run in the 2,000 Guineas.

"It's unfortunate but it's only two weeks away and that does not allow us sufficient time to get the required work into him.

"Consequently he'll miss Newmarket. The two races we have in mind now are both next month, the Dante Stakes at York and the Irish 2,000 Guineas at the Curragh."

The Aidan O'Brien-trained Middle Park Stakes winner Ten Sovereigns is the new market leader for the Guineas at no better than 3-1, with the Andre Fabre-trained Persian King second favourite at 5-1.

Too Darn Hot, by Dubawi out of Dar Re Mi - who won two Group 1s over a mile and a half for Gosden and the Lloyd-Webbers - scored over a mile on debut and remains favourite for the Investec Derby at a best-priced 6-1.

FIRST PUBLISHED 4:30PM, APR 20 2019
Although he has shown great improvement in the last nine days, Too Darn Hot will not be ready in time to run in the 2,000 Guineas

'Two metres! Everybody, two metres!' How racing is adapting to a different world Royal Ascot calling for smart filly Nazeef after Snowdrop success 'All I wanted to do was finish my day, get in the shower and punch the wall' Oaks mover Frankly Darling lights up Britain's first fixture after shutdown Superstar returns: Enable's first target revealed by John Gosden Flat fever: blizzard of top-class action to savour in the coming week and beyond