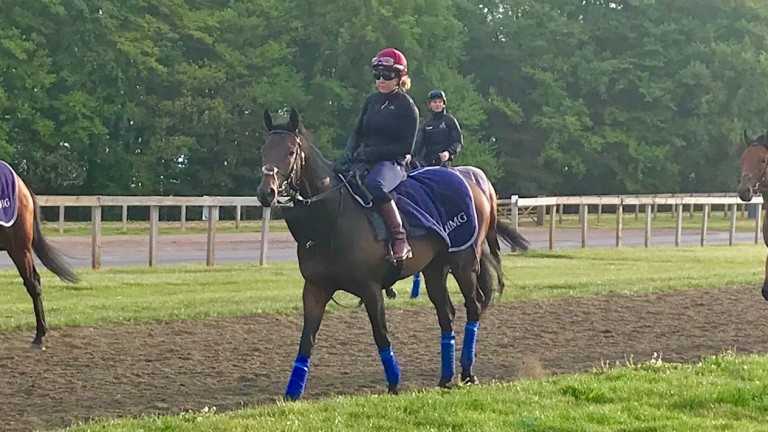 Too Darn Hot and Maisie Hainey on Warren Hill on Thursday morning
David Milnes
1 of 1
By David Milnes 10:20AM, MAY 2 2019

Too Darn Hot has resumed cantering after recovering from the setback that ruled him out of Saturday's Qipco 2,000 Guineas and trainer John Gosden has a revised target of the Group 2 Dante Stakes at York on May 16 in mind for last year's champion two-year-old.

The son of Dubawi was ruled out of the Newmarket Classic on April 20 after failing to recover in time from a splint issue, which had also sidelined him from the Group 3 Greenham Stakes at Newbury the previous week.

However, after a regime of walking and trotting, Too Darn Hot returned to the working grounds last week and was noted doing two routine canters under regular partner Maisie Hainey on Warren Hill on Thursday morning.

Too Darn Hot second canter on Warren Hill this morning in behind his lead horse f @davidmilnesHQi f @RacingPostTVi pic.twitter.com/RGBrz5TCTf

Gosden said: "Too Darn Hot has been back cantering a few days and all is well with him. The plan would be to take him to the Dante, but we haven't worked him yet and we'll know more when we've stepped him up next week."

The Dante, run over 1m2f and a key trial for the Investec Derby, would be Too Darn Hot's first try over further than a mile.

He won over a mile on his debut at Sandown and his three starts since have all been over 7f, the latest in the Dewhurst at Newmarket in October.

Gosden has won the Dante four times previously most notably with subsequent Derby winners Benny The Dip (1997) and Golden Horn (2015). His recent run of success in the race includes Wings Of Desire (2016) and Roaring Lion 12 months ago

Too Darn Hot is a general 5-1 favourite for the Epsom Derby which this year is to be staged on June 1.

FIRST PUBLISHED 10:20AM, MAY 2 2019
The plan would be to take him to the Dante but we haven't worked him yet and we'll know more when we've stepped him up next week