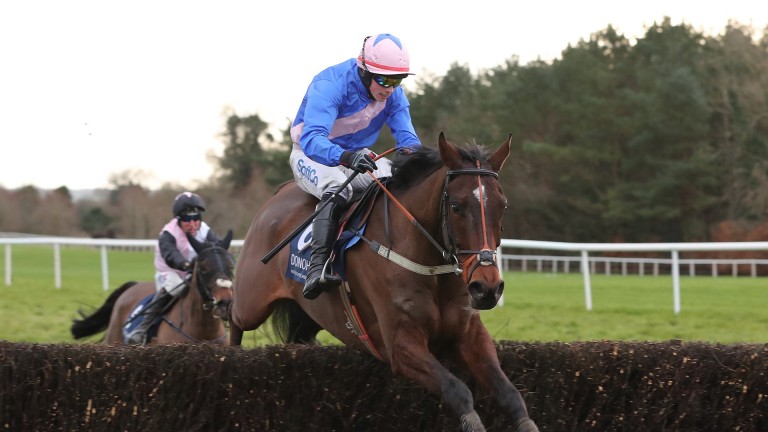 Riders Onthe Storm: has run just three times over fences and may have room for improvement
CAROLINE NORRIS
1 of 1
By Brian Sheerin UPDATED 6:56PM, MAR 11 2019

It is ten years since Tom Taaffe welcomed back aCheltenham Festival winner to his stable inKildare, but inRiders Onthe Storm the trainer has big hopes of ending the long wait.

The Gold Cup-winning trainer,who won this race 11 years ago with Finger Onthe Pulse,reportsRiders Onthe Storm to have coped well on his first journey outside Ireland.

“He travelled over well and has settled in lovely, which is great to see, as that’s a big part of the whole thing,” Taaffe said.“They’re expecting a lot of rain between now and the race and, having walked the track, I’d be pretty certain it will come up soft to heavy, which shouldn’t be a problem.

"He’s only run three times over fences in his life and we’re hoping there’s more improvement in there.”

Riders Onthe Storm was originally Bryan Cooper’s mount, but with that jockey retainedto ride the Paul Nolan-trainedQuamino, Taaffe was forced to find a late replacement.

He explained: “Bryan is retained to ride for the owner of Quamino. I only realised a couple of days ago he wouldn’t be able to ride for us, which left us a little bit snookered, but when I found out Brian Hughes was available I was happy to have him on our side.

"His overall record speaks for itself and he has a good record in the race as well, having won two of the past three runnings.”

Joseph O’Brien, trainer of Tower Bridge and Shady Operator
Both are running in a handicap for the first time. They're in good shape but it looks very competitive.

Gordon Elliott, trainer of Cubomania, Ben Dundee and Roaring Bull
Cubomania has loads of experience and has won over the course and distance but we wouldn't want to see much rain for him. Ben Dundee started off well over fences but was let down by his jumping on his last two starts and that will need to improve in his first handicap. Roaring Bull has always had plenty of ability but hasn't always shown it. He came good last time when winning easily at Naas and, although he's been hiked in the weights, we're hoping he has another going day.

PaulNicholls, trainer ofMovewiththetimes
He's been frustrating. He makes mistakes sometimes but we've done a lot of work on his jumping and he can jump well. He's well capable of running well if his jumping holds up. He's run some good races and has been a bit unlucky on occasion– jumping is key.

Alan King, trainer of Good Man Pat
He came back with sore shins after finishing third in thePendilatKemptonover Christmas but is back fit and well. He’s improved with every run over fences and is better racing left-handed so should give a good account.

Nicky Henderson, trainer of Lough Derg Spirit
I like the way he's going at the moment. He won nicely last time and is in very good form. It's competitive, a close-knit handicap as always, and while the ground might not be ideal he should cope with it.

Neil Mulholland, trainer of Walt
He's come out of Kempton really well and the way he was so big and bold at the last showed the race didn't take too much out of him. It's going to be competitive and we're dropping back in trip but if the ground gets a bit softer he'll have no problem staying.

Paul Nolan, trainer ofQuamino
The ground is a bit of a worry. He’s won on heavy ground, but as a 97-rated hurdler and not a 138-rated chaser, so if the ground deteriorates his chance weakens. I was very happy with him atLeopardstown, where he saw his race out well, and that gives us hope. We’re very happy with him.

Colin Tizzard, trainer of The Russian Doyen
He's been a good horse for us from the day we bought him. He's in the right grade and looks superb. This is a nice race for a horse like him.

Thesolid-looking A Plus Tardis taken to show further progress and give rising star Rachael Blackmore a festival success. The 5yo should have plenty more to offer and gets the vote over compatriotRiders Onthe Storm, who is another youngster going in the right direction. The Irish have a few other likely players, notablyTower Bridge, who is third on the list. Fourth choice isGood Man Pat, who can prove best of the British-trained contestants.
Steve Boow

FIRST PUBLISHED 6:00PM, MAR 11 2019
He travelled over well and has settled in lovely, which is great to see, as that?s a big part of the whole thing