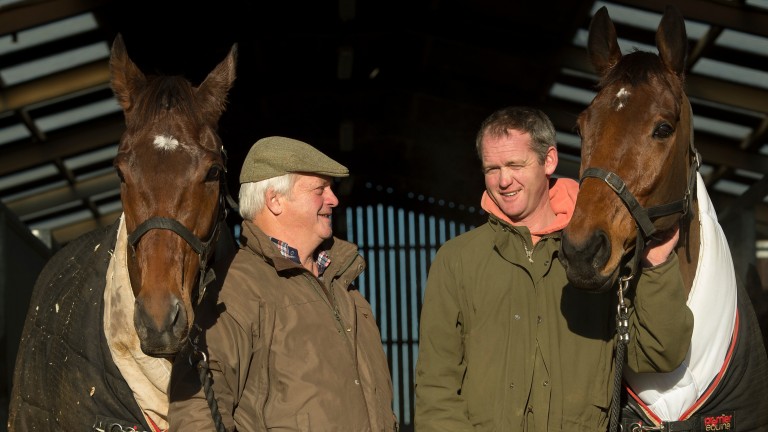 With arguably the three best staying chasers in Britain safely tucked up in their neighbouring boxes after delivering more presents for connections than the big man himself over Christmas, team Tizzard look to a potential star of the future to kick off the new year with a similar bang on Saturday when Finian's Oscar tries to become a Grade 1 winner in just his second start under rules in the 32Red Tolworth Novices’ Hurdle at Sandown.

After Thistlecrack, chased home by stablemate Cue Card, provided a Boxing Day to remember for the yard in the King George VI Chase and Native River made light of topweight in the Welsh Grand National, the Tizzard family enter 2017 with high spirits and confident Finian’s Oscar can deliver a performance at Sandown that justifies his already lofty reputation within a stable high on quality.

“Dad hyped him up beforehand. He paid a lot of money for him and potentially he’s our best novice at the moment,” said assistant trainer Joe Tizzard, agreeing with his dad Colin’s previous assessment of the Irish point-to-point winner, who cost owners Ann and Alan Potts a cool quarter of a million pounds at the sales in November.

Since that purchase, Finian’s Oscar bolted up on his stable debut at Hereford last month, prompting Saturday’s big-race rider Tom O’Brien to hail him “something special”.

“It’s a big step up but we think he’s capable of doing it,” added Tizzard jnr.

“He was bought with a big reputation from the point-to-point world and he’s done everything right since coming to us. You couldn’t fault the way he won at Hereford and this is the next step for him. We could have gone small again but he deserves to take his chance and we’ll see exactly where we are with him.”

A top-price 11-4 second favourite for the Tolworth with the race sponsors behind 2-1 market leader Capitaine, Finian’s Oscar can be backed at 20-1 for all three of the open novice hurdles at the Cheltenham Festival in March, a meeting already in the thoughts of connections.

Tizzard said: “Cheltenham is on our mind. Mr Potts likes to have runners there. With Capitaine likely to make the running it’ll make it a true test, which will play to our strengths because we’ll get the trip very well. He’s a smart horse.”

The Paul Nicholls-trained Capitaine, already the winner of a Grade 2 novice hurdle at Ascot, will be the mount of Sam Twiston-Davies, whose younger brother Willy, recently returned to jumps racing from the Flat, is pencilled in for the ride on 16-1 shot Ballyhill.

While the final Tolworth line-up will be revealed on Friday morning, a bumper field of 19 was declared on Thursday for the £100,000 32Red Veterans′ Handicap Chase, in which the Tizzards will be represented by Theatrical Star, joint third-favourite with the sponsors at 10-1 in a market headed by Dynaste at 7-1.

Tizzard added: “He lost his way a little bit but had a lovely run over hurdles last time and schooled really well this week. If he comes back to his old form he’s got a live chance but it’s extremely competitive.”

Sandown’s head of racing Andrew Cooper is delighted with the field for the second running of a race that marks the final of the 2016 veterans’ chase series.

He said: “In all my time here this is the first three-mile race that has come anywhere near the maximum field size of 20. It’s a lovely concept and has made a massive boost to the competitiveness and attractiveness to our day for sure.”

The course was frozen in places on Thursday morning but based on the milder weather forecast, Cooper said there is “no obvious concern” for Saturday's card, which could be run on predominantly soft ground should the forecast 5-6mm of rain arrive on Friday night.

FIRST PUBLISHED 5:16PM, JAN 5 2017
We could have gone small again but he deserves to take his chance and we'll see exactly where we are with him