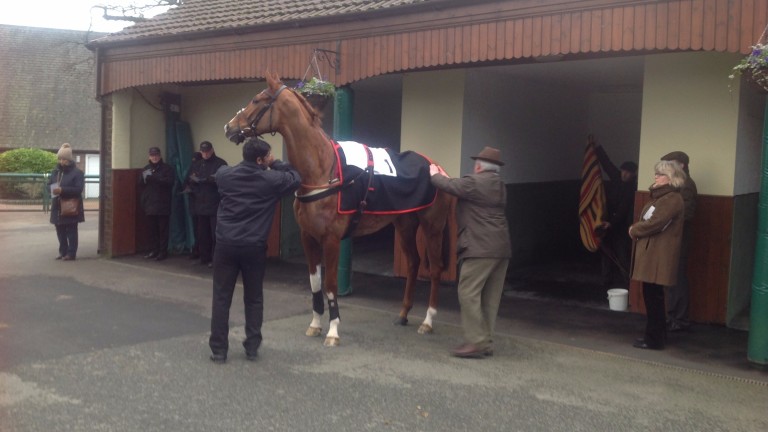 Colin Tizzard is keeping faith with Alary despite the mystifying disappointment of his anti-climactic British debut.

The highly touted ex-French chaser, who was placed twice in Grade 1 company in his native country, started joint-favourite for the Peter Marsh Chase at Haydock only to be pulled up three fences from home.

He had been bought by Ann and Alan Potts as a Timico Cheltenham Gold Cup contender and his trainer stressed on Sunday: "It wasn't his running and we've seen this with French horses before, it's not the first time.

"Because he is high profile everyone is jumping about, but horses can do that and we haven't changed any of our minds at all at the moment. We're just going to keep an open mind for a week and see what shows up."

Immediately after Saturday's race Tizzard, who already has three of the top four in the betting for the Gold Cup in Thistlecrack, Native River and Cue Card, had hinted that a physical explanation for Alary's disappointing effort might emerge.

He said on Sunday: "Nothing has come to light. We've had him out and trotted him up and he seems fine. So I know no more than I did last night.

"But we'll scope him and do blood tests and see where we are in the next week."

Tizzard has no plans to enter the Potts's Fox Norton in the salvaged Clarence House Chase at Cheltenham on Saturday.

The Betway Champion Chase contender has not run since landing the Shloer Chase at Cheltenham in November, and his trainer said: "He won't be ready for another three weeks and he will go for the Game Spirit at Newbury."

FIRST PUBLISHED 1:35PM, JAN 22 2017
Because he is high profile everyone is jumping about, but horses can do that and we haven't changed any of our minds at all at the moment