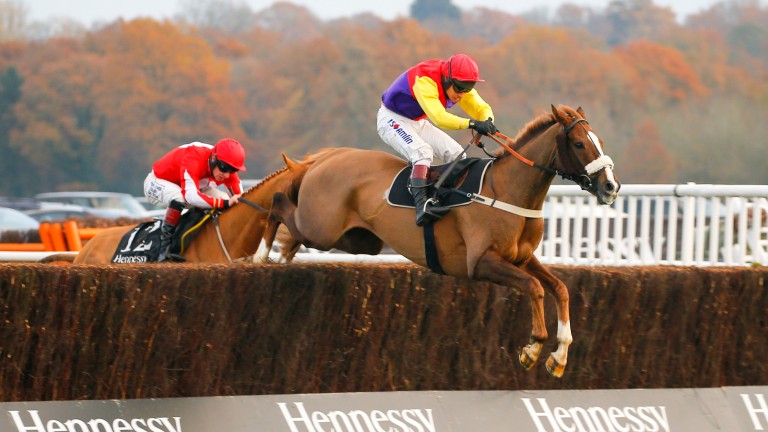 Colin Tizzard left Newbury the envy of his colleagues everywhere after Native River continued the trainer's remarkable season with a gallant victory in the 60th running of the Hennessy Gold Cup.

Seven days on from Cue Card's sensational performance in the Betfair Chase and just over two hours after star novice Thistlecrack gained a foot-perfect third chase victory, Tizzard unleashed a third potential Cheltenham Gold Cup candidate in the form of the progressive Native River, who powered clear after the last and had just enough in reserve to hold off the fast-finishing Carole's Destrier.

While Cue Card and Thistlecrack possess cruising speeds to die for, Native River, who provided champion jockey Richard Johnson with his first success in the Newbury showpiece, is cut from a different cloth with his bottomless stamina capable of breaking the toughest of rivals.

Nudged along by his rider from a long way out, Native River kept finding more and despite a wayward jump three out the pair quickly regrouped to take the lead over the second last.

The challengers were lined up behind at the final fence but the 7-2 favourite stuck on gamely up the run-in. Although gutsy runner-up Carole's Destrier closed the gap all the way to the line, it was too late.

'I can't believe it'

Tizzard, who was quoted at 6-4 to train the Gold Cup winner by Betfair, said: "I've got all the toys at the moment, I can't believe it. The horses have come to me, I haven't found them, and I don't know how many I will have in the Gold Cup."

The trainer, who surpassed the million mark in total prize-money for the first time last season, is on course to do the same before Christmas this time. After victory in the £200,000 showpiece, he was cut into 4-1 (from 6) for the trainers' championship by William Hill, having been a 25-1 chance at the start of the campaign.

Like Cue Card, Native River was dispatched to Wetherby for his seasonal comeback and his second-placed finish in the bet365 Hurdle was regarded as the perfect pipe-opener for the Hennessy.

But the gritty chestnut, owned by Brocade Racing, is a chaser through and through as he confirmed on this day last year with victory in the bet365 Novices' Chase – won by Thistlecrack earlier on the card – and subsequent displays when second in the National Hunt Chase and an impressive winner of the Grade 1 Betfred Mildmay Novices' Chase. 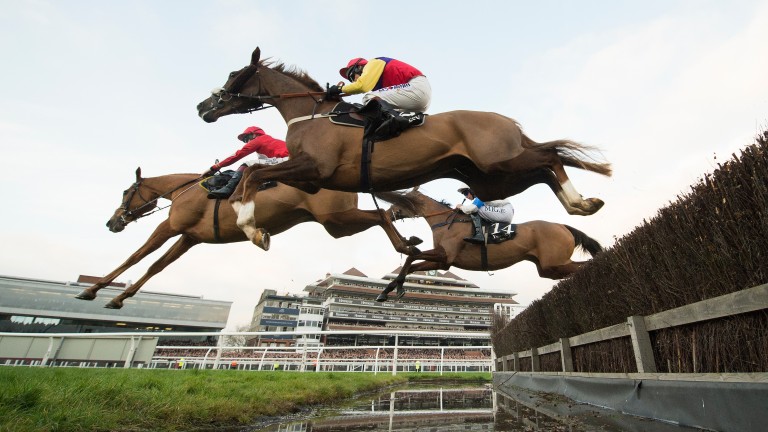 Native River jumps the water on the first circuit just behind long-time leader Double Ross
Edward Whitaker
Regarding future targets, Tizzard said: "Native River won't be going back over hurdles now. He's in the Coral Welsh National but might be a bit better than that.

"If he's in the same sort of form in March he could join the team in the Gold Cup. If you win a Hennessy you're usually right up there with the best of them.

"We dreamed after he won the novice chase here on this day last year that he would be back for the Hennessy.

"The race went perfectly for him and I was surprised how well he was travelling. I didn't like the idea of bullying him all the time and Richard has ridden him brilliantly."

Johnson had twice finished second in the Hennessy but finally ended a wait stretching back 18 years. He said: "It's always nice to win one you haven't before. He's a fantastic horse and Colin and his team are in amazing form. I'd knew he'd pick up again, although turning in I was a bit worried I wasn't going that well. But he's one of those where the more you ask, the more he gives."

Neil Mulholland had mixed emotions after Carole's Destrier's barnstorming late run. "It's a bit of a double-edged sword as he's run such a great race but we're sick to get so close," he said. "The plan was to come here and then go for the Coral Welsh National and he has shown he jumps, stays and gallops and wants further.

"He was a little slow at the last but has come home strongly and I'm very happy with him. He'll have an entry in the Aintree Grand National if I can convince his owner."

Ten-year-old Double Ross ran a mighty race in third as he attempted to become the first winner aged in double digits since Diamond Edge in 1981, while Hadrian's Approach stayed on for fourth.

But this was another super Saturday for Tizzard, whose all-conquering Dorset team grows in stature every week.