Tizzard dreaming of emulating Dickinson with a famous five 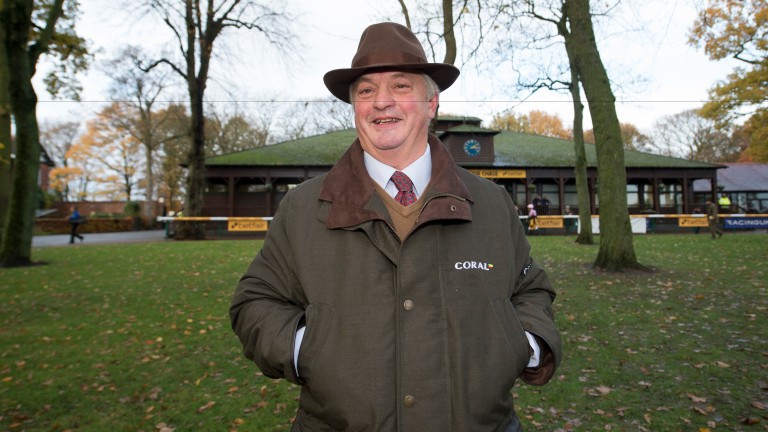 Colin Tizzard is daring to dream the impossible dream. The trainer who has taken this season by storm is considering the possibility of running all five of his Timico Cheltenham Gold Cup entries on March 17 to raise memories of the ‘famous five’ race of 1983.

Thirty-four years ago Michael Dickinson stunned the jumping world by sending out the first five home in the Gold Cup, led home by favourite Bregawn.

Tizzard, who trains odds-on favourite Thistlecrack, is already attracting bookmaker interest in his multiple entry after the retirement of last year’s winner Don Cossack. Coral offer evens about him having a one-two, 6-1 he trains the first three home and 150-1 the first five.

“We might have a go at the big five-timer, who knows?” said Tizzard. “If not many are turning up for the race we might look at running them all but we will keep every option open.”

With nine weeks before the Gold Cup and prep races to come there are plenty of fences to clear before Tizzard could have the chance to match a record nobody thought possible.

The Dorset trainer has the first three in the betting with Thistlecrack, Hennessy and Welsh National winner Native River and Betfair Chase hero Cue Card. Alary, a big-money buy out of France, and Theatre Guide, owned like Cue Card by Jean Bishop, make up his five-strong entry.

Dickinson’s achievement of training the first five home in the 1983 Gold Cup was voted number one in Racing Post’s top 100 training feats in a poll in 2006.

Tizzard has called into question another Gold Cup bid for Cue Card after his King George defeat to stablemate Thistlecrack, but after watching re-runs of the race he feels Cue Card “did not run up to his mark".

He added: “Even in his real pomp he didn’t really perform to his best [at Kempton] there and on really good ground it didn’t play to his best. He ran perfectly all right and was beaten by a better horse on the day.”

Defeat led to talk of Cue Card diverting to the Ryanair Chase at the Festival and Tizzard will test his credentials in the Betfair Ascot Chase next month.

Cue Card won the 2m5f Grade 1 four years ago before winning the Ryanair and Tizzard added: “That will tell us where we are with him.”

On Saturday week Alary, a top-priced 25-1 for the Gold Cup, is likely to make his debut for Tizzard in the Peter Marsh Chase after much anticipation since his purchase from France, where he was third in the 3m6f Grand Steeple-Chase de Paris, the French Gold Cup, at Auteuil in May.

Tizzard said: “He is ready to run and we are keeping options open as he shows a lot of pace at home but in France he was a three mile six furlong horse. We need to find out what he wants in English conditions.”

Gold Cup second favourite Native River goes back to Newbury for the Betfair Denman Chase next month but the surprise last piece in the jigsaw is Theatre Guide, who was seventh to him in the Welsh National last month.

“He will have other options at Cheltenham but he was running a big race at three and a quarter miles before not quite getting home so we are keeping the option open for him if not many turn up for the Gold Cup.”

Coral spokesman Simon Clare said: "It would be fantastic for the festival if Colin Tizzard runs all five horses in the Gold Cup. Our odds suggest he is long odds to win the Gold Cup, very likely to train the first two home, could well have the first three home, but will achieve one of the great training feats of all time if he is to equal Michael Dickinson's record.”

Like Cue Card, Alary was among the 48 entries revealed on Thursday for the Ryanair Chase. Tizzard has five possibles in that Grade 1 on March 16, with Fox Norton, Viconte Du Noyer and Sizing Granite the other contenders.

The latter three are among 28 entries for the Betway Queen Mother Champion Chase on March 15, for which Douvan was on Thursday the top-priced 4-9 favourite ahead of Fox Norton and Altior.

Getting a horse to win a race as big as the Gold Cup is an achievement on its own and in 1983 that is exactly what trainer Michael Dickinson did.

However, what happened behind Bregawn was remarkable as Captain John, Wayward Lad, Silver Buck and Ashley House chased him home - and all were also trained by Dickinson.

Turning into the straight it was Bregawn who led from three of his stablemates, with the rest of the field almost nowhere to be seen. At the last, there was the remarkable scene of three stablemates fighting it out and all having chances of winning for the most prestigious race in the jumps calendar.

Bregawn came home on top and one-by-one the other Dickinson runners followed him home in one of the greatest feats of jumps training there has ever been.