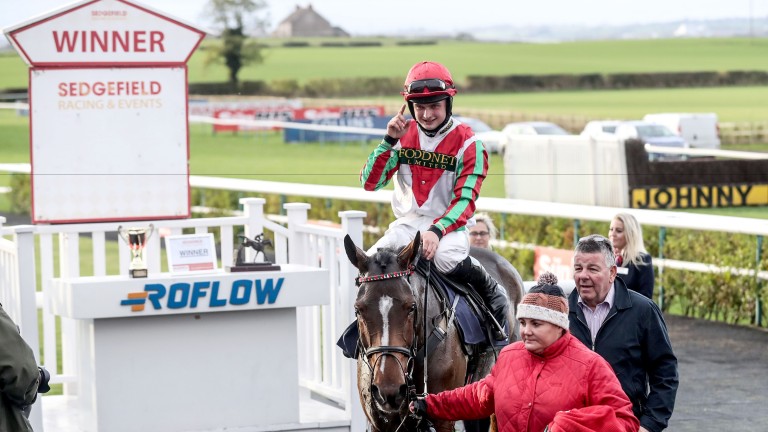 Colin Tizzard won the Sussex marathon 12 months ago with Golden Chieftain and is back for more with Fergal Mael Duin who is one of the few in the 16-strong field with recent winning form in the book.

The eight-year-old has done all his winning at today's track including on his first start for Tizzard over 2m5f last month.

Although he is up in trip today, Fergal Mael Duin was not stopping that day but faces stiff opposition from Welsh hope Buachaill Alainn, who has already bagged a National this term as he won the Durham version at Sedgefield last time.

Bottomweight, Finish The Story, is back for another crack after finishing second to Golden Chieftain a year ago. Also returning is Pete The Feat who finished sixth that day.

The market has been an average guide to this of late with only Peut Etre Sivola (2010) the sole outright favourite to win in the past decade.

Kerry Lee, trainer of Russe Blanc
He has a lot of weight but goes there in good form and the ground must be soft for him to show his best.

Emma Lavelle, trainer of Mosspark
He has plenty of ability but he just needs everything to drop right for him. He should handle the the ground but it depends how he acts on the track as horses tend to either love or hate the place.

Charlie Longsdon, trainer of Pete The Feat
He's a legend of a horse but is not easy to get fit first time and he should give our amateur rider Jordan Nailor a great ride around there.

Jonjo O'Neill, trainer of Cloudy Copper
He likes the good to soft ground and is in good form with himself at home for his first run back but I expect him to come on for it.

Caroline Bailey, trainer of Carli King
He's had a long time off and I expect he'll come on for it but the ground and trip should suit. I nearly had him ready to run last season but he still had some heat in a leg so we had to wait.

Chris Gordon, trainer of Ballyheigh Bay and Carloswayback
Ballyheigh Bay had a wind operation before his last run when he ran very well to be second at Kempton. He's a course winner and should go well. Carloswayback had a spell point-to-pointing when he first joined us which was a disaster and we are having a day out with him.

David Dennis, trainer of Cyclop
It was no surprise he didn't see out the trip on his return at Kelso and he has come on for it. He should like the track and any rain they've had. The race looks tailormade for him.

Charlie Mann, trainer of Morney Wing
He got left at the start a little at Cartmel last time so that run is best forgotten and he needs this sort of trip so he should be competitive.

Johnny Farrelly, trainer of Finish The Story
He was second in it last year but he was race-fit then whereas he's having his first run of the season this time.

FIRST PUBLISHED 6:00PM, NOV 12 2016
He should like the track and any rain they've had. The race looks tailormade for him