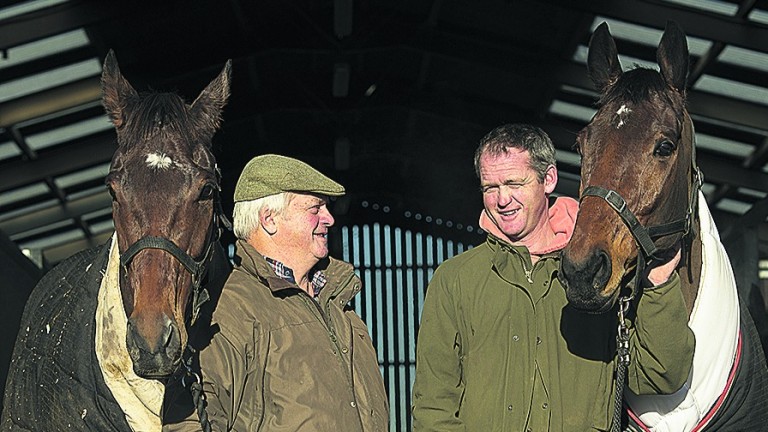 The Tizzard team for the King George - Cue Card, held by Colin, takes on Thistlecrack, pictured here with the trainer's son Joe
Edward Whitaker
1 of 1
By Lee Mottershead 3:35PM, DEC 23 2016

The presence of only three rivals against Colin Tizzard's two superstar stayers has left the trainer convinced that allowing Thistlecrack to take on defending champion Cue Card in the 32Red King George VI Chase was the right decision.

With Gigginstown House Stud failing to declare either Road To Riches or Roi Des Francs, a five-runner field is set to face the starter at Kempton, where Timico Cheltenham Gold Cup favourite Thistlecrack seeks to become the first novice to capture racing's eagerly-awaited Christmas showpiece.

Aside from his stablemate, Thistlecrack will meet familiar foe and dual King George winner Silviniaco Conti, plus Josses Hill and Tea For Two, most recently first and second in the Peterborough Chase.

Bookmakers continue to find it nigh on impossible to separate the Tizzard pair. Cue Card, last month partnered by his now regular big-race rider Paddy Brennan to a third victory in the Betfair Chase, is narrowly preferred by the sponsors at 6-5, with Thistlecrack a 5-4 shot. However, some other firms are marginally siding with Tom Scudamore's mount, winner of novice events this season at Chepstow, Cheltenham and Newbury.

"Now I've seen there are only five in the King George, I'm really glad we're going down that route with Thistlecrack," said Tizzard.

"It will make it a bit more tactical and there might not be the sort of headlong gallop we've become used to in the race. I'm pleased both horses are in the King George. They're in beautiful form."

With intended rider Noel Fehily claimed for Silviniaco Conti – who most recently finished 42 lengths behind Cue Card at Haydock – Daryl Jacob has been confirmed for Josses Hill, a front-running winner of his two outings this term, the opening one of which was at Kempton.

Also boasting course form is Tea For Two, who on Boxing Day last year was the horse on which Lizzie Kelly became the first female jockey to win a Grade 1 event in Britain.

Assuming all five declared runners take part, the King George will have its joint-smallest field since One Man defeated four opponents in 1996. In 1964 Frenchman's Cove proved too good for Jay Trump in what became a match after Arkle scared off all but two chasers only to be pulled out himself due to hard ground.

"One has to look at the bigger picture," said clerk of the course Barney Clifford.

"It was a massive blow to everyone to lose the ante-post favourite Vautour, and we have also lost Simonsig and Avant Tout. They were all being programmed to participate, as was Coneygree, who has been forced to miss the race as well.

"It is probably just one of those years, but there is certainly quality at the top end."

Clifford on Friday maintained the ground description as good, good to soft in places, and he expects similar conditions to prevail on Monday.

He added: "The forecast for tonight says a band of light rain will pass through and, with a bit of luck, we could get 2mm to 5mm. Thereafter there is a risk of showers on Christmas Day, but on Boxing Day we're set fair with bright, sunny weather and a maximum temperature of 9C.

"We had been forecast anything up to 20mm earlier in the week but it hasn't materialised. The ground is lovely and the drop of rain will keep us where we are."

FIRST PUBLISHED 3:35PM, DEC 23 2016
It will make it a bit more tactical and there might not be the sort of headlong gallop we've become used to in the race