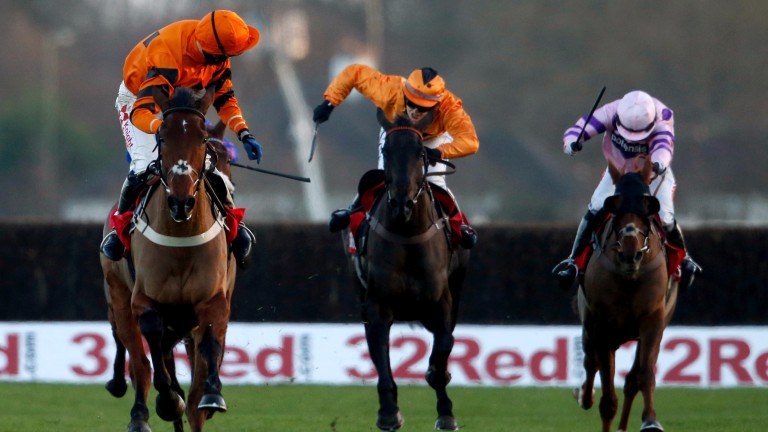 The depth of talent available to Colin Tizzard and Gordon Elliott was evident on Wednesday, with the two trainers responsible for ten of the 39 entries for the Timico Cheltenham Gold Cup.

That number has already been reduced to nine, following the news that last year's winner Don Cossack has been retired, but Elliott can still call upon the likes of Outlander and Don Poli, who fought out the finish to the Lexus Chase last month. His team is completed by Empire Of Dirt and Roi Des Francs.

Tizzard holds an even stronger hand and his team of five contains the front two in the market, Thistlecrack and Native River. Thistlecrack is odds-on to give Tizzard victory in the Cheltenham Festival showpiece, while Welsh National winner Native River is next best at a top-priced 6-1. Cue Card, Alary and Theatre Guide complete Tizzard's contingent.

The Gold Cup has yet to make its way on to the mantlepiece of Willie Mullins, although he has saddled the runner-up for the last four seasons. Djakadam has been second in the last two Gold Cups and could return again, while Vroum Vroum Mag is the other possible for Ireland's champion trainer.

Lexus seventh Zabana is available at 40-1 for the Gold Cup, and could run for Andy Lynch.

The trainer said: "Zabana is just ticking over at the moment and could run next in the Irish Gold Cup depending on the ground. He went a bit wide in the Lexus and I think he will get closer to them next time. That's what I'm hoping.

"He's in the Gold Cup and also in the Ryanair. We will just see how things work out between now and then. I'd have no problem going for the Gold Cup as he loves Cheltenham and the trip will be no problem."

Paul Nicholls could run Silviniaco Conti again, and also has the option of Saphir Du Rheu. The 2015 Grand National winner Many Clouds was sixth in the race before going on to victory at Aintree and has been entered by Oliver Sherwood.

FIRST PUBLISHED 1:58PM, JAN 11 2017
Tizzard holds an even stronger hand and his team of five contains the front two in the market, Thistlecrack and Native River