Gosden honoured as past and present share the limelight 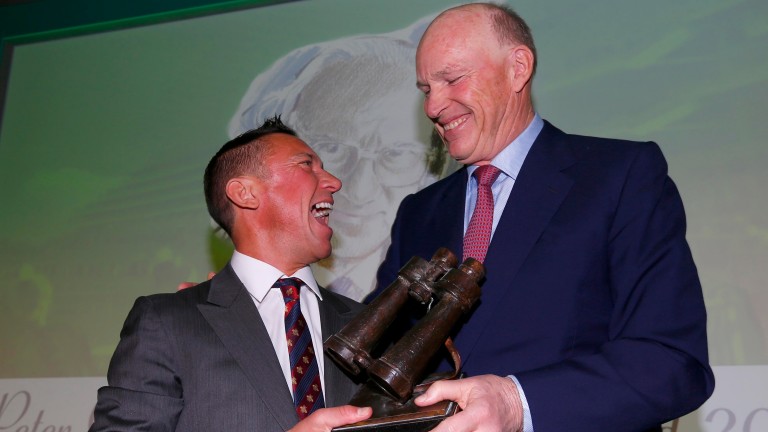 Rory Bremner does Donald Trump, master of ceremonies is Ed Chamberlin, and Gary Moore is watching his Towcester runners on a mobile phone.

Time goes by and times change. So the Peter O'Sullevan award lunch moves with the times, in this its 20th year, yet still casts a net of deep nostalgia befitting of an audience of 485 racing people getting into the swing of the year-end awards season.

O'Sullevan used to worry whether people would turn up. No worries on that score. It's in the Dorchester, a venue with all the measured elegance of an O'Sullevan commentary.

They're a good match, the 1930s luxury hotel by Hyde Park and the journalist turned broadcaster turned equine welfare warrior who, even now, is remembered as a wild boy for whom lunch always went to extra time and penalties.

The vivid description is John Gosden's in the midst of his acceptance speech after being presented with the Peter O'Sullevan Award for 2016 by Frankie Dettori.

O'Sullevan dined at the top table when it came to contacts. Hugh McIlvanney's sonorous soundtrack to a film of Gosden's career by producer Gerry Morrison held the room in as soothing a way as Bremner was to do later to unrestrained laughter.

Yet Gosden can bring his own style of wit, on display in remembering advice from his ailing father Towser, who trained in East Sussex.

"The last thing he said to me before he died, about five days before, was whatever you do, don't become a racehorse trainer," said Gosden.

He recalled being 'loft man' to Sir Noel Murless – in charge of hay and straw by all accounts – as he made his way to the top of the game via the unimpeachable Vincent O’Brien.

"I remember he got up to 72 horses," said Gosden of the Ballydoyle incumbent. "He said to me he'd definitely need an assistant with that many."

Times change. There was no better evidence than footage of Gosden with wispy blond hair walking in with The Minstrel after his 1977 Derby triumph, and later, with a little less wispy blond hair, interviewed at Santa Anita in the era of 1983 Eclipse Award winner Bates Motel by none other than D Wayne Lukas, then at NBC but later to train no fewer than the winners of 25 Eclipse Awards.

Memories of O'Sullevan were apposite. Gosden was to sum up his character in the words of literary realist Henry James who, like O'Sullevan, spent his final days in Chelsea.

O'Sullevan has been more than kind to the six equine welfare charities his trust has benefited to a sum approaching £5 million. This year proceeds from the lunch and auction, which raised £138,500, are to be shared with the Freddy Tylicki Fund.

As Gosden said: "Sir Peter was one of racing's most eloquent ambassadors."