Time for vital cogs in racing wheel to step into limelight

Brough Scott celebrates the work of stud and stable staff 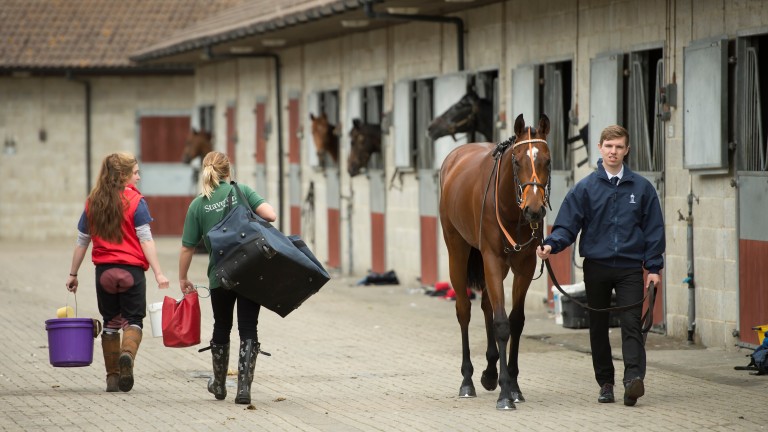 Whose horse is it anyway? That’s both the question and the unifying factor about the people we celebrate today. It reinforces the truth that what first appears to be mere individual equine athletics is actually dependent on the tightest of team games.

When Cue Card won on Saturday the reaction was as to a national treasure. It was seven years, 16 victories and more than £1.3 million in prize-money since he scored first time out at Fontwell in the pink and royal blue silks of Jean Bishop and her late husband Bob. Indeed, so wide was the welcome that it prompted the thought that this horse belonged to everyone.

Click here to watch the awards live from 9pm

The sense of ownership is a wonderful thing as it stretches all the way down from the guys on the racecard who stump up the training bills to the punters in the betting shop whose bets buy the right to sound off on everything up to and including the immediate castration of both horse and jockey. But, in all this chain, none feels closer than those who work day and night at the stables and studs with the four-legged players around whom the whole thing revolves.

It is the nature of the game that stable staff remain in the background, just as the physio and the kit man are with a football team. But their relationship means even more to the trainer who is going to call the shots because, in their case, they are dealing with athletes who cannot talk. Horses cannot complain, can’t admit to a problem, cannot suggest a solution. But the people closest to them can.

As somebody who long ago had to abandon ambitions to be a trainer on the grounds of temperamental inadequacy, I have huge admiration for the achievements of Colin Tizzard and his fellow handlers.

But many years of exposure to their number have persuaded me that the most important thing in their profession is to avoid making mistakes. No one, be they called Tizzard, O’Brien, Baffert or Fabre, can make a horse go faster. But with bad management, they can sure as hell slow them down.

How many foals have failed to develop because an early ailment was not checked? How many potential Classic horses have been ruined by being worked or run when the trainer either would not listen or was not told of something slightly wrong? How many Cheltenham stars have never made it because that first

tell-tale sign of injury was not spotted in time? How many plans have been ruined by lack of organisation at home?

Only one person can talk to the press in the winner’s enclosure, just as only that same figure can make the phone call that says a lesser horse has failed and it’s time to sell to stop the bleeding.

But those statements and decisions cannot be made without the daily dedication of people who will rarely get the limelight. A bad trainer has only one pair of eyes, a good one a multitude. In the end there can be only one decision. It will not always be correct but its success rate will vary exactly in ratio to the quality of the information supplied.

When we all gather for the Godolphin Stud and Stable Awards these might seem statements of the obvious. But at other times they are all too easily forgotten. They shouldn’t be. That’s why it’s good to honour the backroom guys, to toast: “Racing – The Team Game.”