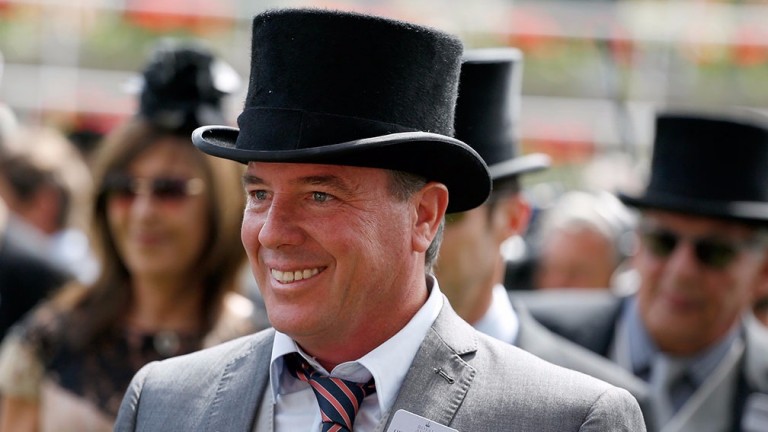 Wesley Ward, the most successful overseas trainer in the history of Royal Ascot, has his sights set on conquering another country after revealing he was "beyond a shadow of a doubt" interested in having a runner in Australia's inaugural edition of The Everest, unveiled on Wednesday as the world's richest turf race.

The six-furlong contest, to be run at Royal Randwick racecourse in Sydney on October 14, will be worth $A10 million (£6m/€7m/$7.5m) and replaces the Arc and Japan Cup as the richest race on turf.

Its organisers describe it as a "game changer" and The Everest has certainly captured the imagination of Florida-based Ward, who has saddled seven winners at Royal Ascot and excels with sprinters.

"To go there and have a horse to be competitive and in with a good chance of winning would be a thrill, and to see another country like Australia would be a great adventure," said the trainer.

"I ran Cannonball down there in the Lightning Stakes and Newmarket Handicap in 2010, but unfortunately I was not able to get down there as I had a horse going for the Kentucky Derby at the time.

"It was a shame because I'm close friends with Gai Waterhouse and was dying to get down there and spend some time with her.

"I've never been to Australia and met Gai at Royal Ascot. She's since been over several times to visit me and I'm really looking forward to at some point getting down to see her. This sounds like something I'd be looking to do."

Ward hinted last summer's Queen Mary winner Lady Aurelia, who went on to capture the Prix Morny during her European tour, may have been a candidate for The Everest had it been around last year and said he would be keen to exploit whatever weight concessions two-year-olds would get from older horses.

"I'd be really interested to see what the weight break would be," he added.

"We nearly won the Nunthorpe with Acapulco a few years ago getting a big weight break, and two-year-olds getting a weight allowance in The Everest would be something that would intrigue me if I was to be successful and have a winner at Royal Ascot this summer.

"It's one of the reasons we had Lady Aurelia in Newmarket last year, because there's really nowhere to run them in the States."

Regarding his current crop of juveniles, Ward said: "We haven't really let anything out yet as we don't breeze the horses until March 1, so that's when the cream rises to the top - when we start doing the 100m, 200m speed work.

"That's when they start to separate so I won't know what I've got for another month, but from looking at them from a physical point of view and how they move I've got a wealth of talent in my barn."

Ward, however, seemed to dismiss the chances of Lady Aurelia - whose efforts last year meant she was just 1lb shy of champion two-year-old Churchill - heading down under, saying: "Unfortunately this race would come just before the Breeders' Cup in the States so that would knock us out of that."

The concept of The Everest involves owners buying a slot (a three-year commitment for A$600,000 a year) that can be traded. It borrows heavily from last month's inaugural $12m Pegasus World Cup, one of just two contests worth more than the new arrival.

FIRST PUBLISHED 8:15PM, FEB 2 2017
Looking at them from a physical point of view and how they move I've got a wealth of talent in barn