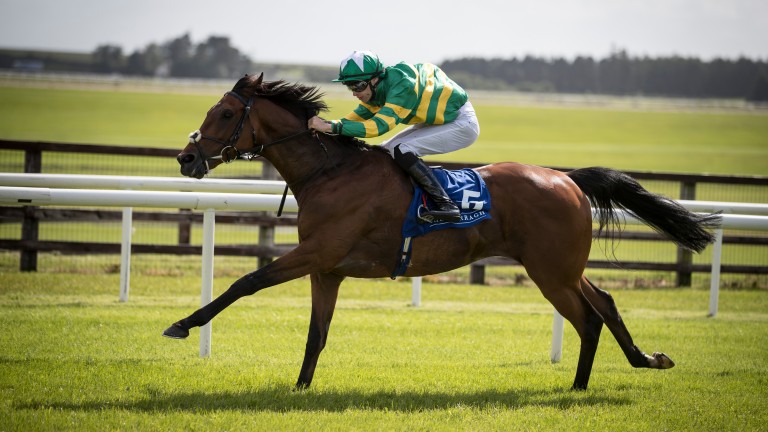 After years of trying Barry Geraghty needed all his strength and a willing partner in Tigris River to get on the big-race scoreboard at Galway for the first time.

The Galway Plate and Thursday's Guinness Galway Hurdle – Ireland's most valuable hurdle contest – had both eluded Geraghty but he put matters right when forcing 5-1 shot Tigris River up to thwart Swamp Fox by a neck.

It was a particularly sweet hour or so for the all-conquering O'Brien team, with Joseph O'Brien saddling Tigris River after father Aidan had won the Nassau Stakes at Goodwood with Winter.

And for JP McManus, Tigris River was a second Galway Hurdle winner, the owner having had seven runners in all this year.

The success clearly meant a lot to Geraghty, who had resumed race-riding only on Monday after a long spell on the sidelines with an arm injury.

"Along with the Plate, the Galway Hurdle is one of the big jumps events of the year in Ireland and it's a huge thrill to have won it at long last," said the winning jockey.

He added: "I was second in the race a couple of times and had a few falls in it on horses who were travelling well. I also made the mistake of turning down Missunited when she won the race in 2013."

Reflecting on Tigris River's performance, Geraghty said: "We were on the stretch most of the way but in fairness to the horse he picked up really well in the closing stages.

"The runner-up quickened away from the last and it was only in the last 70 yards or so that I thought we'd get up."

And Geraghty paid tribute to John Butler and Therese Leahy, the physios on duty at the track this week.

"They've been a huge help to me over the past few days," he said. "They've done a great job."

Unlucky in running when fifth in the race last year, Tigris River, whose dam Hula Angel won the Irish 1,000 Guineas, was scoring for the fifth time over hurdles.

O'Brien, who is enjoying a fine summer with his team, said: "Barry gave him a great ride, I'm delighted. He was probably flat out all the way as he probably wants a little bit further, but the preparation and the race went perfectly. There's no stronger man than Barry."

McManus, whose previous winner was Thomas Edison in 2014, said: "Joseph is very dedicated – the apple didn't fall far from the tree."

That, of course, was a reference to his father Aidan, himself a Galway Hurdle-winning trainer with Toast The Spreece 20 years earlier.

The same year that Thomas Edison was winning the Galway Hurdle for McManus, then three-year-old Tigris River was winning a 1m6f maiden on the Flat at Killarney under O'Brien, beating a certain Special Tiara, then a sprightly seven-year-old.

The uniqueness of that maiden was not lost on Special Tiara's owner Sally Rowley-Williams, who contacted the Racing Post to say: "Who would have predicted that three years and two weeks ago that the first two home in the mile-and-six maiden at Killarney would win the Galway Hurdle and the Queen Mother Champion Chase in 2017? I wish I had put on that bet!"

Swamp Fox, who had been runner-up in the Connacht Hotel Amateur Handicap on the Flat on Monday, went down fighting, with the first two home finishing five lengths clear of third-placed Airlie Beach.

Willie Mullins said of his Grade 1-winning hurdler Airlie Beach: "She ran a smashing race. She's in foal to Mount Nelson and we have only another couple of weeks left with her. We might try to win a Flat maiden."

Stablemate Max Dynamite was sent off 7-2 favourite but could manage only ninth.

"He made one bad mistake and that more or less put paid to his chance," added Mullins.

FIRST PUBLISHED 4:47PM, AUG 3 2017
Along with the Plate, the Galway Hurdle is one of the big jumps events of the year in Ireland and it's a huge thrill to have won it at long last