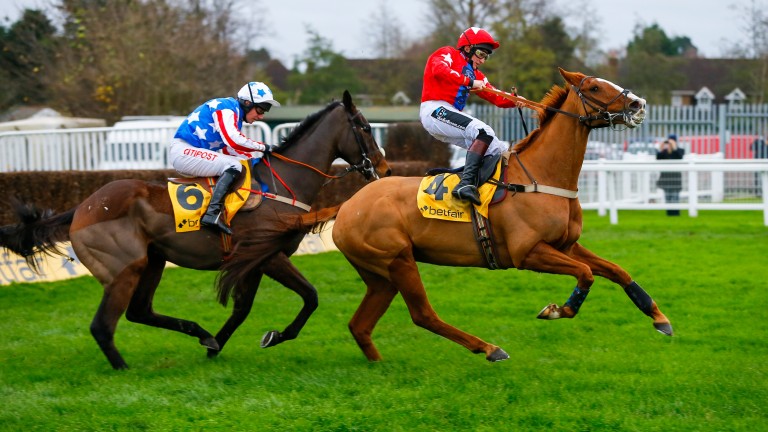 Sire De Grugy on his way to winning the 2015 Tingle Creek Trophy after colliding with Special Tiara at the final fence
Mark Cranham
1 of 1
By Lee Mottershead 6:00PM, DEC 26 2016

A race that remembers one jumping icon and was last year won by another this time brings together a pair of popular two-milers who clash in what bookmakers believe could be a head-to-head battle.

If it is, it will not be their first.

Sire De Grugy and Special Tiara are both previous winners of the Desert Orchid Chase and famously came together – quite literally, in fact – in the 2015 Tingle Creek, in which Sire De Grugy narrowly emerged victorious having hampered the Irish raider at the final fence.

On that occasion they met at level weights but this time Sire De Grugy – touched off by Sprinter Sacre in this prize 12 months ago after winning it in 2013 – must concede his Henry de Bromhead-trained rival 10lb. However, he does so off the back of an excellent Ascot handicap victory and a fine second to Un De Sceaux in the Tingle Creek.

Sire De Grugy's trainer Gary Moore said: "The ground and Special Tiara are the main worries. It won't be easy. Henry de Bromhead's horses are flying and we have to give Special Tiara 10lb, which is a massive concession.

"Sire De Grugy's in grand form, but I think the track will probably suit Special Tiara more than us."

Sire De Grugy on his way to winning the 2015 Tingle Creek Trophy after colliding with Special Tiara at the final fence
Mark Cranham
Special Tiara, who adopted his customary trailblazing tactics when landing the Desert Orchid in 2014, was below par on soft ground at Cheltenham last month but is expected to be better suited by the quicker conditions that are troubling Moore.

Special Tiara's rider Noel Fehily said: "The ground was way too soft for him last time but on better ground I think you'll see a different horse. The track suits him and on his day he's a very good horse."

Sir Valentino was a distant last in this race 12 months ago but has improved since then and last time posted a personal best when a five-and-a-half-length fifth in the Tingle Creek.

"He ran a solid race on ground which was probably soft enough for him," said trainer Tom George. "I think the course and ground will suit him this time."

Trainer Dan Skelton said: "He's a standard in these races and wins one every year – but it won't be this one.

"He can't beat Special Tiara or Sire De Grugy, and he probably can't beat Sir Valentino either, but Harry [Skelton, jockey] said he did feel better last time until he fell."

FIRST PUBLISHED 6:00PM, DEC 26 2016
Sire De Grugy is in grand form, but I think the track will probably suit Special Tiara more than us