Bookmakers make Lah Ti Dar the banker of the day, even shorter than her brother Too Darn Hot in the Dante 35 minutes later, as she makes her seasonal return against five rivals.

Lah Ti Dar, unraced as a two-year-old, announced her arrival on the big stage at York last August as she routed her Listed rivals in the historic Galtres Stakes at the Ebor meeting.

Chasing home Kew Gardens with the rest well beaten off in the St Leger raised her stock and she lost nothing in defeat when third in the Qipco British Champions Fillies & Mares Stakes, where she was a place behind her stablemate and last year's winner of this race Coronet.

Her owner-breeders Lord and Lady Lloyd-Webber will be hoping she can go one better than her mum Dar Re Mi, who was second to Crystal Capella in this race ten years ago.

Trainer John Gosden "She is a large, tall, imposing, rather old-fashioned-looking mare. This race has been earmarked for a very long time and she has been training nicely.

"The trip is fine – although moving up to a mile and a half afterwards will be beneficial to her – and we're hoping for a good show."

Who can beat her?

Both the BHA handicapper and Racing Post Ratings make last year's German 1000 Guineas winner Nyaleti the danger to the odds-on favourite after her second in the Group 2 Dahlia Stakes at Newmarket's Guineas meeting.

Charlie Johnston, assistant to his father Mark, trainer of Nyaleti, said: "You have to have a lot of respect for Lah Ti Dar but take her out and it doesn't look the strongest renewal of this Group 2. 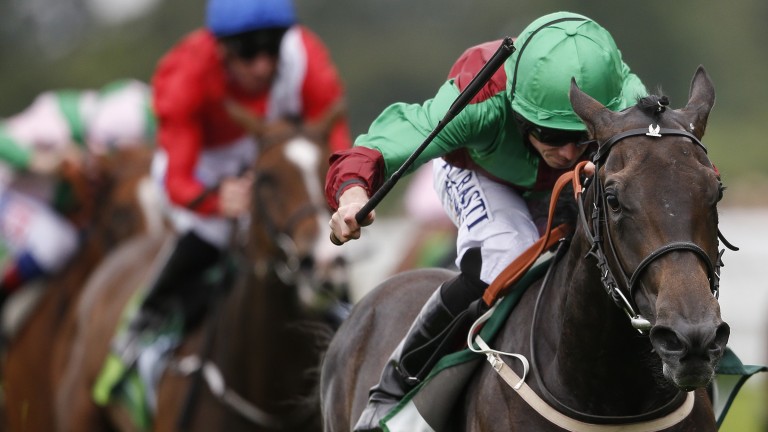 Nyaleti: could be the main danger to Lah Ti Dar
Alan Crowhurst

"Joe [Fanning] felt it was her not handling running into the dip at Newmarket which cost her the Group 2 last time as she was making up ground on the winner at the finish.

"The step back up a furlong on a more galloping track should be right up her street."

Mrs Sippy, who started last season chasing home Sea Of Class at Newbury in June, might find a couple of her rivals too quick on her return.

Trainer David Simcock said: "She had a good winter, so hopefully will have come on for that, and is training well but it is likely she'll find two or three a bit quick for her – we think she is a mile and a half filly."

Sun Maiden is another runner with a family name to live up to as she is a half-sister to Midday, who won this race eight years ago as a five-year-old in a career that spanned three years and six Group 1s.

The Juddmonte-owned filly is a four-year-old and Midday was beaten in this race at that age by Oaks winner Sariska.

Sir Michael Stoute, who last won this race ten years ago, is also represented by Sun Maiden's stablemate Rawdaa, a progressive handicapper last year who was placed in Listed company on the all-weather on her seasonal return.

FIRST PUBLISHED 6:00PM, MAY 15 2019
This race has been earmarked for a very long time and she has been training nicely