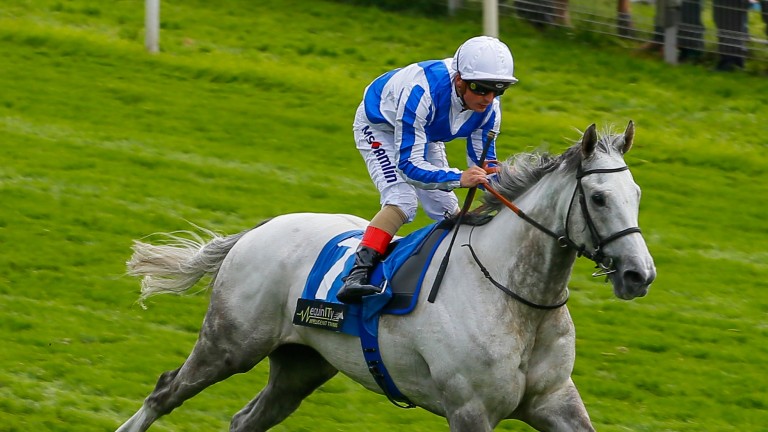 John Smith's Cup runner-up Thundering Blue could step up in class at the Knavesmire on Saturday in a bid to land the Group 2 Sky Bet York Stakes.

Bookmakers on Monday found it hard to judge the merits of the David Menuisier-trained horse, with Betfair Sportsbook and Paddy Power offering 15-2, bet365 12-1 and the race sponsor 10-1.

Thundering Blue ran a fine race in the John Smith's Cup two weeks ago to finish two and a quarter lengths behind Euchen Glen and his trainer does not send runners up from his west Sussex base to York simply for a day out – he has won with two of his ten career runners at the course.

Menuisier said: "Thundering Blue came out of the John Smith's Cup really well and we're looking at the Sky Bet York Stakes for him.

Thundering Blue had previously disappointed when a strong fancy for the Duke of Edinburgh Handicap, coming home 11th of the 17 runners.

Menuisier added: "It was an accumulation of things that cost him there. It was really quick ground, being the last race on the Friday, which was too fast for him.

"He's a hold-up horse, who has to go at his own pace before being allowed to use his stride. He was drawn wide at Ascot and had to creep into the race. The same thing happened in the Cambridgeshire last year, when he had nothing to take him into the race."

He added: "I think he's probably a Group horse now. He could have won the John Smith's Cup with a bit more pace and, if he had, he'd probably be rated 107 or 108.

"It's a matter of gauging whether we throw him into the deep end this week or wait a bit longer."

Favourite with Sky Bet at 7-4 is Elarqam, who was fourth in the 2,000 Guineas at Newmarket and then sixth, when favourite, in the Irish equivalent.

'It's the dream more than ever now' - Menuisier eyes Arc with royal winner 'What a filly' - Wonderful Tonight a Royal Ascot first for delighted connections York chief hopeful of bigger crowds despite likely delay to 'Freedom Day' 'He's very much on the up' - progressive sprinters clash on the Knavesmire Less is more: top bookmakers 'disheartened' by return of overcrowded Saturdays