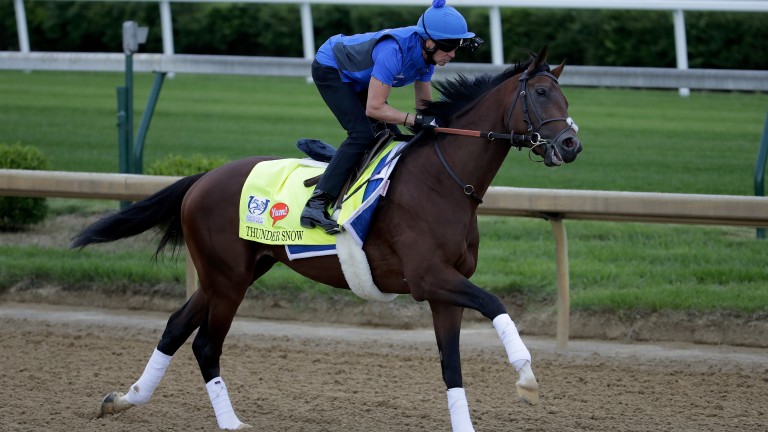 Thunder Snow: had been pleasing his Godolphin connections at Churchill Downs before mystifying display in Kentucky Derby
Getty Images/Andy Lyons
1 of 1
By Nicholas Godfrey 6:00PM, MAY 5 2017

Godolphin have never had any notable success in the Kentucky Derby but longserving trainer Saeed Bin Suroor reckons Thunder Snow offers the Dubai team their best-ever chance of a historic triumph beneath the Twin Spires at Churchill Downs.

At one time, the Run for the Roses was said to be the race coveted by Sheikh Mohammed above all others. While that may have been an exaggeration, Frosted's fourth two years ago for US-based trainer Kiaran McLaughlin is the highest placing ever achieved by a horse carrying the royal blue silks in America's most celebrated race. From seven previous runners, Bin Suroor's best effort came in 2000 when China Visit finished sixth.

Indeed, there has never been a European-trained Kentucky Derby winner of any kind – Bold Arrangement came closest with second place for Clive Brittain in 1986 – though whether Thunder Snow would count as truly European-trained must be a moot point.

The son of Helmet may have shipped from Newmarket but he spent the winter being trained at Godolphin's Dubai station Al Quoz, from which base he earned his place in tonight's $2 million contest with a narrow UAE Derby victory.

Yet while Bin Suroor is fully aware of the magnitude of the task facing Thunder Snow, he rates his chances in what was described as a "wide open" race by rival trainer Dale Romans.

"I am very excited," said Bin Suroor. "I have been waiting for this moment for a very long time to bring a horse with a big chance to run in the greatest race in America.

"Thunder Snow is a tough horse, which you need because the Kentucky Derby is a very, very tough race," he added. "The horse was doing really well in Dubai before he came here but it is not easy to send a horse to the Kentucky Derby unless you know he has the class. Our horse has the class. He is the best horse we have ever sent and he has a better chance than the horses we have run in the past.

"To me he is solid. He is a Group 1 winner in France plus he won the UAE 2,000 Guineas and Derby on the dirt which means he has the class to run and a mile and a quarter is no problem for him. He has arrived fresh and healthy and I am very happy with him."

Thunder Snow, who races on Lasix for the first time, breaks from gate two in a maximum 20-runner Derby field. Bin Suroor reckons Christophe Soumillon will need to adopt a handy position on the colt, saying: "He has a good turn of foot and he can be there and kick readily – that's the plan. The horse is doing really well and we're looking for a good result."

With rain forecast in the Louisville area, a wet track may be less of a concern for the Thunder Snow team than for some opponents as Meydan was muddy when he won the UAE Derby. However, even allowing for the puzzling formlines generally on offer, there is no shortage of potentially formidable rivals, headed by last year's two-year-old champion Classic Empire, who represents the Tepin team of trainer Mark Casse and jockey Julien Leparoux.

Sent into the winter as ante-post Kentucky favourite after a fine victory in the Breeders' Cup Juvenile, his subsequent progress to Churchill Downs was stuttering to say the least – beaten at Gulfstream, foot abscess, twice refused to gallop – until he bounced back to form three weeks ago and returned to the head of the market by claiming the Arkansas Derby.

Other fancied horses have seriously mixed profiles: McCraken (Ian Wilkes/Brian Hernandez), for instance, was unbeaten until he missed the Tampa Bay Derby with an ankle strain and then got beaten behind shock Blue Grass Stakes victor Irap (Doug O'Neill/Mario Gutierrez), whose connections are seeking their Derby win in six years after I'll Have Another (2012) and Nyquist (2016).

British-born trainer Graham Motion, who scored with Animal Kingdom in 2011, saddles Irish War Cry (Rajiv Maragh), who beat Classic Empire at Gulfstream Park in February before wilting behind late-running Gunnevera (Antonio Sano/Javier Castellano) in the Fountain of Youth – and then redeeming himself once more in the Wood Memorial.

Gunnevera's trainer Antonio Sano – twice kidnapped in his native Venezuela before fleeing for the States – has unquestionably provided the most dramatic pre-race tale as he bids for America's most storied contest with a horse who, as a $16,000 purchase, is the cheapest in the field.

"Everyday I get more excited, more nervous, it is impossible to sleep," said the trainer, who sent out more than 3,000 winners in his native country.

"Every day I think, 'My horse could win the Kentucky Derby!' It would be a big gift for the people of Venezuela at this moment. In Venezuela, people are killing people. People have no food. Very sad."

Lots of runners, not many winners

Gunnevera was never a factor when miles off the pace in the Florida Derby behind Always Dreaming (Todd Pletcher/John Velazquez), who is unbeaten in three in 2017. His trainer, who also runs Tapwrit and one-eyed Patch, but has a notoriously lacklustre record overall with just that one winner (Super Saver in 2011) from 45 starters.

"The record is what it is," Pletcher said. "The Derby is the goal for many of our young horses. It will continue to be the goal. It's like a shooter in basketball: just because they're not going in all the time, you don't stop shooting. The only way you’re going to make a basket is to shoot. Forget what your percentage is, keep shooting."

Steve Asmussen, trainer of Lookin At Lee, Untrapped and Hence
I didn't want the one-hole but if any horse can handle it, it's Lookin At Lee – but we need the distance to make the difference for him. Untrapped gives you confidence that he deserves another chance; he may have gotten off track at Oaklawn but he's trained as impressively as any of them. Hence is fast and he's on fire – very, very sharp – and the eight is one of the preferred spots statistically.

Todd Pletcher, trainer of Always Dreaming, Tapwrit and Patch
Always Dreaming is a good-feeling colt and his energy level is off the charts; the trick for us is to keep him focused. We're very pleased with how he's progressed all winter and spring. He’s been much more aggressive since he’s been here and I’m hoping it’s a sign he’s just ready to rock. Seems like Tapwrit's been galloping over the track well. I think the added distance is right in Patch's wheelhouse.

Mark Casse, trainer of State Of Honor and Classic Empire
Both horses are doing very well. Classic Empire is special in so many ways and there was no way he was 100 per cent fit when he won the Arkansas Derby. With three months between races, there was a long time we didn’t get to do a lot because of his foot and back injuries. Within that time, he probably missed four to five weeks of training. It's been a crazy road but we're where we want to be. He's ready.

Joe Sharp, trainer of Girvin
Everything is going well and I couldn't be happier. I have the utmost confidence he’ll go over there and give his all.

Doug O'Neill, trainer of Irap
He’s got the right style, the right mind and the right body and he’s doing really well right now. He's been doing good all week – he's getting better and better.

Antonio Sano, trainer of Gunnevera
The first time he ever breezed, he was the best horse I’d ever seen in my entire life. The horse is 100 per cent and the post position is good. I said I wanted the middle of the field.

Dale Romans, trainer of J Boys Echo
It's the best he's ever looked – we're ready to go. I think it's as wide open a Derby as we've seen in a long time.

Ian Wilkes, trainer of McCraken
A lot of horses have the talent, but they don’t have the class. This horse has the class and I feel like he is back into his rhythm. The Blue Grass was a little different for him in that he was fresh and didn’t switch leads and that took away from his punch.

Graham Motion, trainer of Irish War Cry
I feel like he's run with legitimate competitors – he beat the two-year-old champion in Florida, although his next run was a bit of a headscratcher but he turned the corner in the Wood Memorial. I really like this horse and I wouldn't trade places with anyone – that's a corny expression but it's the truth. It's an open Derby this year but I couldn't be happier with him. I feel very good about running him; I like his chances.

John Shirreffs, trainer of Gormley
Gormley is very versatile. We’re not looking for the lead. We just want to find a place to tuck in.

Chad Brown, trainer of Practical Joke
He continues to get stronger and I’m real happy with him overall. He got a lot out of that [his last run] and physically he’s a fitter horse now. I’m optimistic he can stretch it out a little farther.

FIRST PUBLISHED 6:00PM, MAY 5 2017
Our horse has the class. He is the best horse we have ever sent and he has a better chance than the horses we have run in the past