Thunder Snow given go-ahead to run for the roses 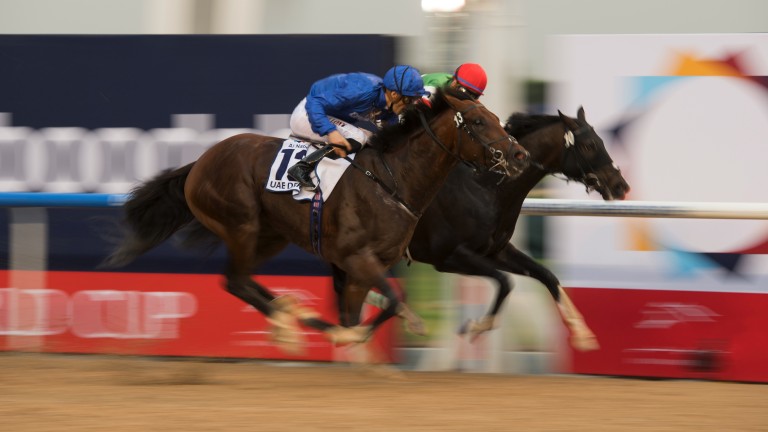 Saeed Bin Suroor believes he has his best chance of winning the Kentucky Derby for the first time after Sheikh Mohammed gave the all clear for Thunder Snow to contest the US Classic at Churchill Downs next weekend.

The UAE Derby winner will become the Godolphin trainer's eighth runner in the race and his first since 2009 in the first leg of the Triple Crown series in which he will be ridden by regular partner Christophe Soumilon.

Bin Suroor said: "Thunder Snow did his last piece of work this morning on the trial ground on the Limekilns in Newmarket. He was in great form at evening stables and he is going to Kentucky."

The trainer's best finish in the Kentucky Derby was a sixth place from China Visit in 2000 and Thunder Snow has won his last three starts including the Group 1 Criterium International at Saint-Cloud before he switched surfaces.

"He has a better chance than the horses we have run in the past," he added. "To me he is solid. He is a Group 1 winner plus he won the UAE 2,000 Guineas and Derby on the dirt which means he has the class to run and a mile and a quarter is no problem for him."

In other Kentucky Derby news Todd Pletcher, who had five contenders, on Saturday ruled out two of them Battalion Runner and Malagacy to leave him with Florida Derby winner Always Dreaming (John Velazquez), Tapwrit (Jose Ortiz) and Patch. Looking At Lee, trained by Steve Asmussen and Sonnetier (Keith Desormeaux) take their places.

Always Dreaming is vying for favouritism alongside last year's two-year-old champion Classic Empire, who redeemed his reputation last time out in the Arkansas Derby.

Jockey Robby Albarado has undergone surgery after breaking his left leg in a spill at Keeneland last weekend and will be replaced by Luis Saez on the Dale Romans-trained J Boys Echo.

Mike Smith's intended mount Girvin worked on Saturday at Keeneland for the first time since April 15, after which he suffered a quarter crack in his off-fore. Trainer Joe Sharp said the Louisiana Derby winner's five-furlong drill in 59.60s - under the trainer's wife Rosie Napravnik - was a "relief", adding: "He worked extremely well and cooled out great. Every day the foot has been better and better."

American Pharoah's jockey Victor Ezpinoza, who is seeking his fourth victory, rides Gormley for Zenyatta's trainer John Shirreffs. Stable companion Royal Mo, the intended mount of Gary Stevens, is currently on the reserve list and requires another withdrawal before getting a run.