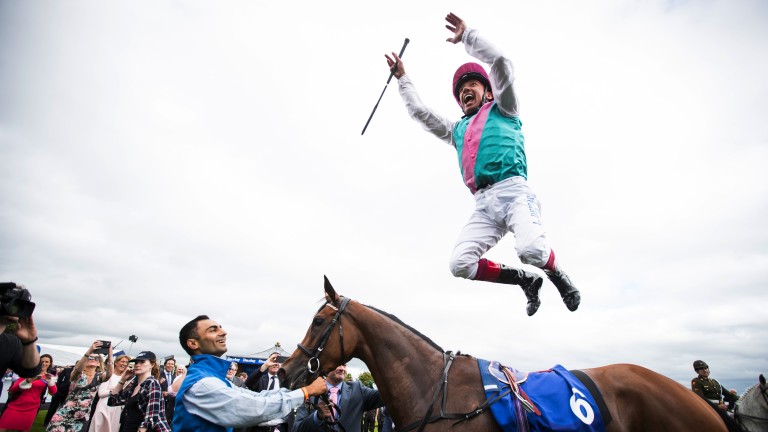 He returned to the winner's enclosure with a flying dismount from Irish Oaks winner Enable at the Curragh on Saturday, but Frankie Dettori says he will be taking it easy for the next fortnight to recover properly from a shoulder injury so that he will be primed for Glorious Goodwood.

The three-time champion jockey expects to take the majority of this week and next to allow his shoulder to fully recover, and he will be a more common sight in the swimming pool, gym and among first lot than he will be on a racecourse during the next fortnight.

Dettori, who took three rides back-to-back at Maisons-Laffitte on Sunday, revealed he was still in considerable pain.

He said: "I'm going to take most of the week off – I'll be riding out and doing physio and all the gym work, but I still need to restrengthen my shoulder. I'll come back at the weekend, but I'll only have a few rides again, and then I could take it easy on the racing front again the following week until Ascot, and then there's Goodwood.

"Enable was what got me through all of the hard rehab sessions – I tried to make it back for Cracksman but he pulls and was too tough a ride at the time – she's special. I had to come back on Thursday to prove I could do it, but it was all about Saturday.

"You don't realise how important your shoulder is until you break it, you use it for everything and it's only been 30 days, so I'm a bit sore, but it's improving every day and should be better again by the weekend."

As for his Goodwood mounts, Dettori added: "I'm really looking forward to getting back on Big Orange [in the Goodwood Cup], and hopefully the weather's glorious because he likes it rock hard.

"The Nassau will be my toughest choice as I have Shutter Speed and So Mi Dar. There's nothing between them so that will go right down to the wire."

FIRST PUBLISHED 5:47PM, JUL 17 2017
You don't realise how important your shoulder is until you break it, you use it for everything and it's only been 30 days, so I'm a bit sore