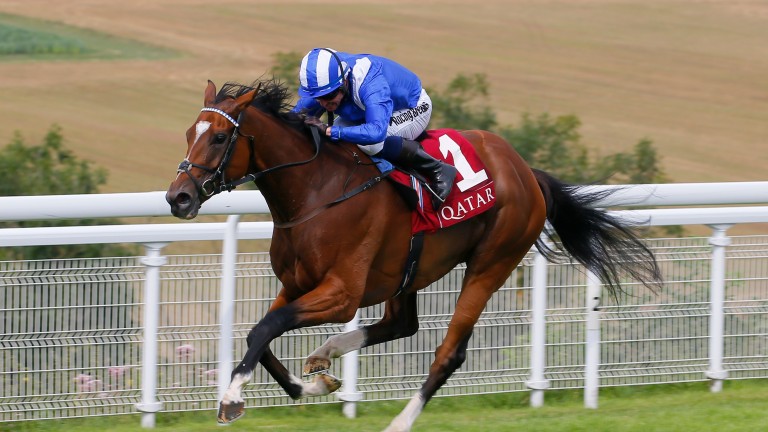 Enbihaar: an impressive winner at Goodwood on Saturday
Mark Cranham
1 of 1
By Stuart Riley UPDATED 10:28AM, AUG 4 2019

Sheikh Hamdan's operation has been somewhat reliant on Battaash to contend at Group 1 level in recent years. Yes, Mustashry won the Lockinge earlier this year, but he was a surprise winner and has disappointed since and while Battaash is not going anywhere based on Friday's showing in the King George – he finally looks to have some back-up.

First Enbihaar announced herself in no uncertain terms, dismantling her rivals in the Group 2 Qatar Lillie Langtry, then Khaadem burst clear to decimate a supposedly competitive handicap.

Let's deal with Enbihaar first. Not only did she come from last to utterly destroy her rivals by five lengths, she did so giving a stone to the second, third and fourth. It adds to her Lancashire Oaks success and was the sort of performance that will have connections considering races like the Irish St Leger, and perhaps even the Melbourne Cup.

Then there was Khaadem, who justified heavy market support in the Unibet Stewards' Cup. To land a such a prestigious handicap by two and three-quarter lengths off a mark of 107 was the performance of a Group 1 horse. His trainer Charlie Hills compared him favourably with Magical Memory, who won the Stewards' Cup at three and then went to Haydock for the Sprint Cup – where he was third.

Both horses have to be a factor in Group 1 company next time.

Khaadem was not the only horse to win a valuable handicap off a triple-figure mark, Mark Johnston's King's Advice landed the Qatar Summer Handicap off a mark of 108.

That in itself is an impressive achievement, and it was an eighth win in nine starts since joining the yard rated 71, but the manner of the win was symbolic of Johnston's horses right now.

He obviously has his string firing, as evidenced by a record-breaking 50 wins last month, but there is almost an inevitability about the finish when one of his horses leads at the furlong marker.

King's Advice was a perfect example. For most of the straight Outbox looked to have him outmatched, but King's Advice did not go away and you just knew he was going to prevail. He kept rallying all the way to the line and eventually won by a cosy neck, just like Sir Ron Priestley, Mrs Bouquet, Nayef Road and Homespin.

All looked beat, all failed to entertain it. Johnston's horses seem to possess a grit that comes regardless of the perceived factors such as sire – all had different fathers yet all refused to be beaten.

Mark Johnston's not the only trainer with his string firing, Saeed bin Suroor won the closing two handicaps with progressive horses.

Both were ridden by talented young riders in Callum Shepherd and Cieren Fallon, came with late charges and pulled clear in comfortable fashion.

Land Of Legends looks worth of a step into Group company next time, but Bin Suroor had a 30 per cent strike-rate in July and has had 7 wins from 30 runners in the last fortnight. His string are worth a second look right now.