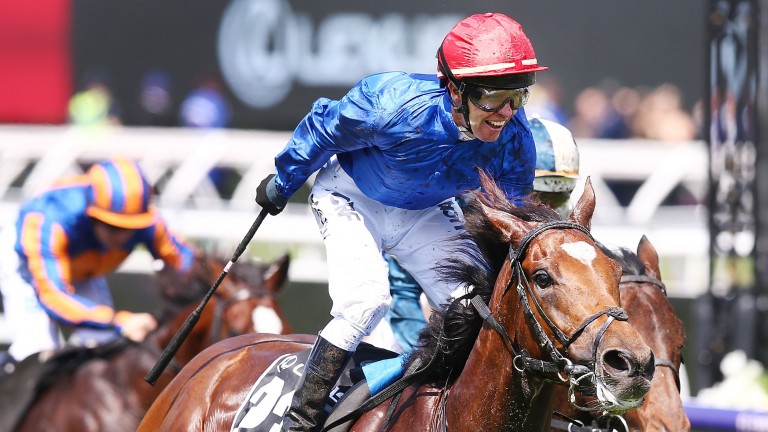 Blue is the colour: an elated Kerrin McEvoy wins the Melbourne Cup on Cross Counter
Michael Dodge/Getty Images
1 of 1
By Stuart Riley in Melbourne UPDATED 11:10AM, NOV 7 2018

In 1993 the Melbourne Cup changed forever. Vintage Crop became the first international winner and Joseph O'Brien was born. In another 25 years time the latter may be viewed as revolutionary in the Cup's history as Vintage Crop is currently.

Dermot Weld opened Europe's eyes to the possibility of winning the great race, but O'Brien jnr has shown them an almost unbeatable formula.

With his first runner in the race last year, Joseph lifted the Cup with European three-year-old Rekindling, who had run in the Derby and finished fourth in the St Leger. This year's winner Cross Counter had a similar profile, having landed the Gordon Stakes and finished second in the Great Voltigeur during his Classic season.

As Hughie Morrison, whose Marmelo finished second, said: "Weight for age makes a lot of difference", while Aidan O'Brien's travelling head lad TJ Comerford said: "Maybe it's a race to bring a three-year-old over for. There was a three-year-old winner and our lad [Rostropovich] ran well from a bad draw."

Indeed, even Appleby gave O'Brien jnr a tip of the cap. "Credit to Joseph and his team last year, they highlighted that three-year-old weight allowance. Joseph and his team did an amazing job and it changed our view on what we might need to bring down.

"It's an allowance for a reason as he's a younger horse taking on his elders and in a race like this you generally need the experience. But when you've got a class three-year-old he can outweigh the inexperience with his class."

The holy grail might of course be a three-year-old Classic filly, one capable of running in races like the Oaks and St Leger. Think Simple Verse. With the three-year-old allowance and a fillies' concession they could get into the race off a featherweight.

Chief handicapper Greg Carpenter suggested that should such horses begin to dominate he would perhaps have to reassess them, but he cannot upgrade their rating on form simply because they are three.

In effect it would require a total re-evaluation of the weight-for-age scale, particularly when pertaining to European three-year-olds just two months shy of their fourth birthday visiting Australia.

Charlie Appleby is a fast learner

Dermot Weld provided the first international winner of the Melbourne Cup 25 years ago, but it took British trainers another quarter of a century to work out the race that stops a nation. The man who finally cracked it, Charlie Appleby, did so at just his second attempt.

He saddled two runners in the 2016 edition, with Qewy finishing fourth and Oceanographer back in 12th, and he merely watched last year, but the lessons learned resulted in Tuesday's triumph.

Appleby won the Derby this year and has won a race at the Breeders' Cup and the Melbourne Cup in a matter of days. It was his 12th Group 1 winner of the year, and with the Godolphin breeding and buying operations seemingly in much better shape, there is no limit to how far he can take Godolphin.

The newly married 32-year-old spent time in Australia early in his career and clearly learned a lot as his plan to bring A Prince Of Arran for the Melbourne Cup did not seem particularly inspired. The horse was a long way down the order of entry, looked an exposed five-year-old and it felt something of a jolly in Melbourne at his owner's expense. Little did we know.

Fellowes's confidence in the horse has been infectious, and his preparation – with help from former apprentice turned travelling head girl Tash Eaton – was superb. But for some traffic trouble and bumping into Yucatan, he may well have won his way into the Cup earlier in the Herbert Power.

When that plan failed Fellowes came up with another. He would skip the Caulfield Cup, Geelong Cup and Moonee Valley Gold Cup and wait for the Lexus Stakes – for several reasons. It was at Flemington, the track he believed would best suit his horse, and it was a win-and-you're-in, which meant they would not need a penalty to get in and with a horse who only does enough that was a help.

That it was three days before the Cup was far from ideal, but Fellowes also knew if any horse in his yard could back up that quickly it was A Prince Of Arran.

He won the Lexus, giving Fellowes the first Group winner of his career, and for at least half a furlong up the home straight looked like winning the Melbourne Cup. In three days he earned just shy of £400,000 (£393,930.63 to be exact) with a horse not many thought would get into the Cup, let alone do himself credit if he did.

It was an inspired bit of training and had the rain not come and taken his favoured firm ground away from him, who knows what might have happened. The next time Fellowes appears to be doing something seemingly bonkers with one of his horses it is probably worth backing.

Bowman hit with 35-meeting ban after rules breaches on Marmelo

FIRST PUBLISHED 8:49AM, NOV 7 2018
Joseph and his team did an amazing job and it changed our view on what we might need to bring down