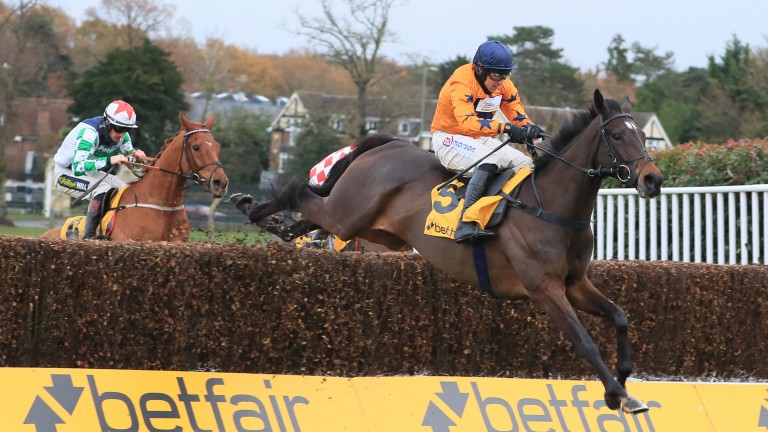 Has won five times on soft or heavy going and is a typical son of his sire Millenary, whose progeny usually love plenty of cut in the ground.

Billingsley has failed to complete on his last two starts and confidence at his fences might be a concern but conditions certainly won't be.

I doubt he has the ability to win this if the opposition all turn up at their best, but if you're looking for a horse who will go through the ground like a Land Rover, Billingsley definitely fits the bill.
Graeme Rodway, tipster

Few horses have an affinity with heavy ground quite like Bristol De Mai, who should be in his element at Sandown.

He has raced five times on ground officially described as heavy, winning four of them, while he was also successful on very soft ground at Auteuil as a youngster.

It is true his outstanding performances have come at Haydock but he is a Grade 1 winner at Sandownand he has winning form at seven different tracks in all so he's certainly not Haydock-dependent. Testing ground is more important and he will certainly have that.
Lewis Porteous, reporter

After sevenconsecutive starts on soft or heavy ground, Alnadam was found wanting on good to soft at Kempton on Boxing Day.

However, he gets a return to the conditions he so clearly loves at Sandown this afternoon, a course where he routedten rivals by six and a half lengths on heavy ground early in December.

If his last run is removedfrom the equation this is a progressive young chaser who relishes a genuine test and he should return to form, albeit in a deeper contest than the one he won two starts ago.
Tom Ward, reporter

A front-runner, trained by Gary Moore, who loves gruelling ground½ High Up In The Air sounds like the perfect answer to the 1m7½f handicap chase that closes Sandown's card.

The seven-year-old has thrived since aggressive tactics were employed, winning his last three races by wide margins. Those victories all came on either soft or heavy ground, which will again suit him on his first visit to a track where his trainer has a fantastic record in this sort of race.
Lee Mottershead, reporter

Destination Dublin:escape to a magical place from the comfort of your own room

1.05 Leopardstown:'He must have a big chance'– Mullins hoping Gaillard gets team off to a flyer

2.10 Leopardstown:the next Douvan or Un De Sceaux? Mullins puts his confidence in Energumene

3.45 Musselburgh:the startling statistics that point to another super Saturday for Sandy Thomson

Watch live races through the Racing Post website. Log in to your bookmaker account via the bookmaker button at the top of the page and look on the racecards for eligible races. Click the red 'Watch live now' icon and they're off! Find out howhere