Three horses it could pay to follow on tonight's cards 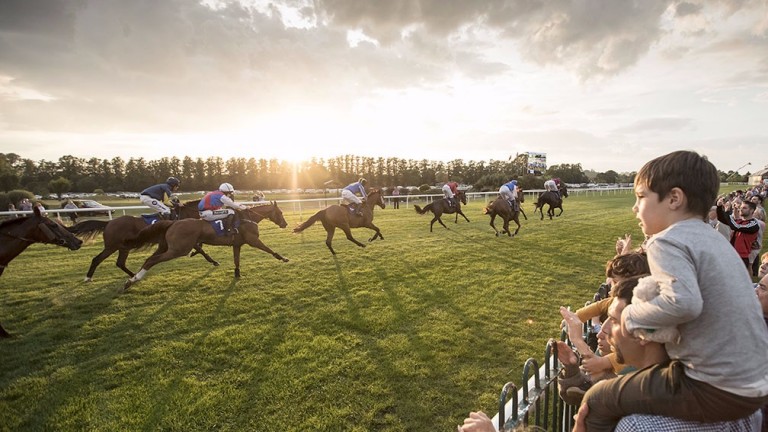 The Nunthorpe at York, Ffos Las staging its ladies' day and a potentially informative card from Newmarket serve as the perfect appetiser to a busy evening with five meetings. There is decent action on the Flat on Racing UK with Goodwood (5.10 start), Salisbury (5.15) and Hamilton (5.30), while the At The Races cameras screen Kilbeggan's jumps fixture (4.45) and the mixed card from Killarney (5.05). Here are three horses to keep an eye on ...

Masarzain
5.15 Salisbury
Archie Watson's first full season as a trainer could not have gone much better and while he has saddled a host of two-year-old winners, he has also gained a reputation for revitalising horses, the latest being former Shadwell inmate Masarzain, a course-and-distance winner last week. He has a 6lb penalty for that success but it might not be enough to stop him, especially with top amateur Simon Walker booked to ride.

Lagostovegas
7.40 Killarney
The Irish jumps trainers' title won't be decided at Killarney in August, but that's not stopped big guns Willie Mullins and Gordon Elliott aiming at the track's €50,000 handicap hurdle. Timiyan represents Elliott, while Mullins, who snatched an 11th trainers' crown from his big rival's grasp at Punchestown in the spring, relies on Lagostovegas, who ran solid thirds on the Flat and over hurdles at the Galway festival. A two-time course winner on the Flat, she is reported to be in good order by Mullins.

The Twisler
7.55 Salisbury
Rated 106 not more than two years ago, The Twisler has dropped to a mark of 75, albeit with some heavy reverses on the way. He failed to fire on his first start for the capable Neil Mulholland last month, but produced a far better effort at Nottingham when a staying-on third ten days ago. The five-year-old may have been closer had he not been hampered and remains on the same mark, while Mulholland –better known for his jumps exploits –is on course forhis best campaign on the Flat.