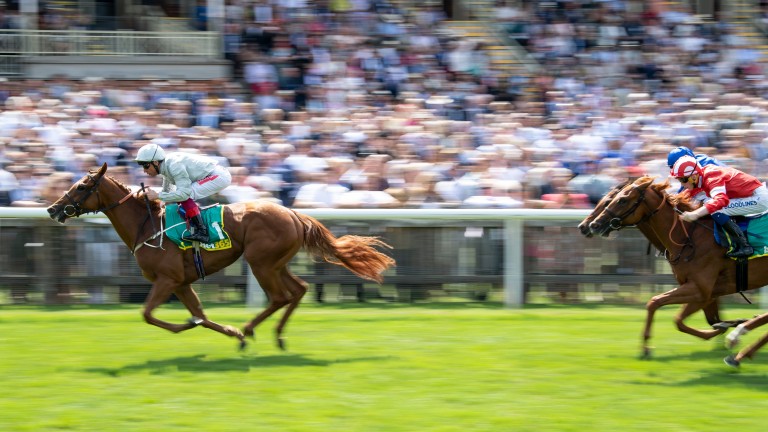 Raffle Prize cruises clear of Daahyeh and Final Song in the Duchess of Cambridge Stakes at Newmarket
Edward Whitaker (racingpost.com/photos)
1 of 1
By Scott Burton UPDATED 9:20AM, AUG 18 2019

The Darley Prix Morny has a rich history of unearthing generational leaders and this year's race looks well up to the mark, with the winner of the Coventry, Queen Mary and Norfolk Stakes all bidding to add a Group 1 success to their respective royal meeting achievements.

Despite his obvious love for Deauville, Mark Johnston has only ever saddled two previous runners in the Prix Morny.

But in Raffle Prize - who won a nail-biter of a Queen Mary and backed that up in some style at Newmarket under a penalty - he has a filly that should give her male rivals plenty to handle.

With more rain forecast to fall on ground already riding soft, the question for Johnston is whether Raffle Prize can show the same brilliance as when streaking away from Albany winner Daahyeh.

"She's been absolutely fine since Newmarket and it's all pretty obvious in terms of her form and the path that leads us here," said Johnston. "We really don't know about the soft ground but then neither do the rest. It would even be hard to use it as an excuse if she were to be beaten because it's a very competitive race."

Crisford: A'Ali 'has done nothing but please'

The second of the Ascot trio is A'Ali, who was a well-supported winner of the Norfolk Stakes under Dettori and then backed that success up here in the rerouted Prix Robert Papin over five and a half furlongs.

"A'Ali has been super well and done nothing but please us in the buildup," said Crisford. "I can't say that these conditions are going to be ideal - that would be stretching the imagination - but he has form on soft ground at Ascot.

"I don't think that’s his optimum surface but nevertheless he is in great shape and we know he can handle it. It might just blunt his turn of foot a little bit but we're looking forward to it."

Coventry Stakes winner Arizona certainly encountered some of the deepest ground on offer during a Royal Ascot meeting which started under glowering skies but which ended with pretty quick times.

His two nearest pursuers have both been beaten again since but the Aidan O'Brien-trained son of the 2013 Morny winner, No Nay Nay Never, carries a towering home reputation and can be expected to have come forward again after just three career starts.

O'Brien, who also saddles Royal Dornoch, said: "We gave him a little break after Ascot and he seems to be in very good form. Obviously, the nicer the ground, the better it'll suit us. Royal Dornoch is still a maiden but he's progressing."

British and Irish domination of the Morny has left few opportunities for the French trainers and you have to go back to the mighty Zafonic in 1992 for the only winner of the race trained by Andre Fabre.

The chances of Fabre doubling his score looked to have increased significantly when Earthlight made it three from three with an impressive display in the Darley Prix de Cabourg.

The recent rain had shed some doubt on Earthlight's participation but Fabre said on Saturday that the imposing son of Shamardal will take his chance.

Fabre said: "It's a new world for him now he is running against experienced colts and it will be interesting. I'm fond of him, he is a good-looking horse with good acceleration.

"The ground is a concern because he is a horse with a fluid action and I am not sure he will like the soft and destroyed ground we have at the moment. He will run though, whatever."

Golden Horde has two lengths to find with Arizona on their meeting in the Coventry but he looked to have potentially bridged that gap when turning the tables on Threat in the Richmond Stakes.

"He was very good at Goodwood in the Richmond and I'm very happy with him," said Cox, who won this race in 2012 with Reckless Abandon. "I really don't know about the ground. He's out of a Pivotal mare and I'm hoping that will be in his favour, but we won't know until he goes on it." 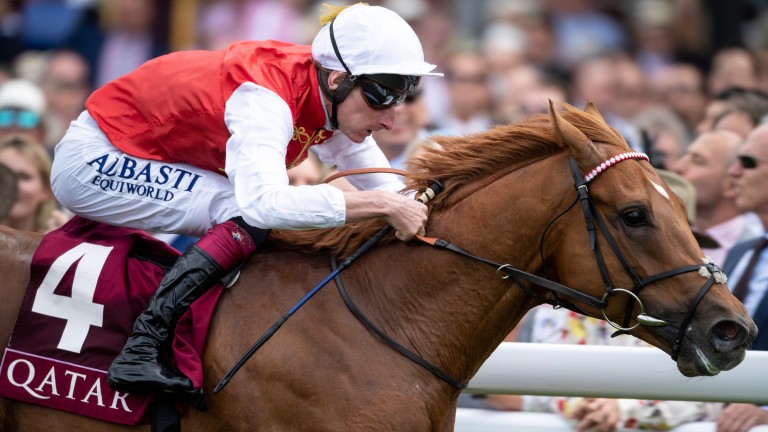 Cox added: "I think he's come on again since Goodwood, undoubtedly. Every step has been progressive and I hope that continues. This is a step up in grade, but he's a very nice horse and will be going forward if it doesn't work out in this."

Aroha and Devil out for Group breakthrough

The other filly in the line up, Aroha has been butting heads with the best around, having finished third in the Albany Stakes and then second to Under The Stars back at Ascot last month.

"It's a good renewal but I think she has every reason to be there," said Meehan. "She's a very good filly and consistent at this level. I feel quietly confident she'll run a big race. The soft ground will be absolutely fine, her two best performances have been on good to soft. She's a top two-year-old and needs to go in the good races."

Devil comes here off the back of a course and distance debut win last month and went into plenty of notebooks, both on looks and the manner of his success.

Trainer Freddy Head said: "He is very well and has come on well for his run. We’ll see how he gets on because he undoubtedly has ability but he may lack a little experience."

FIRST PUBLISHED 6:00PM, AUG 17 2019
We really don't know about the soft ground but then neither do the rest