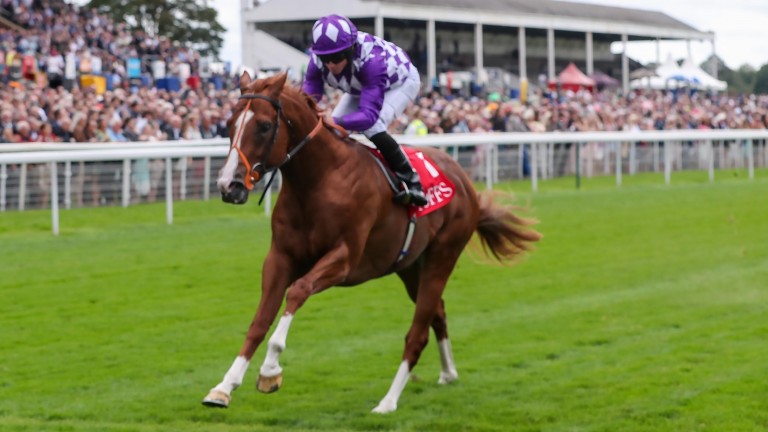 Mums Tipple: put in an exceptional performance at York on Thursday
GROSSICK RACING
1 of 1
By Stuart Riley UPDATED 6:29PM, AUG 25 2019

Richard Hannon will keep stablemates Mums Tipple and Threat, the trainer's two winners at York's Ebor festival, apart for the remainder of this season but has raised the exciting possibility of them meeting at three and is confident both can develop into leading milers.

Mums Tipple and Threat are a shorter price with bookmakers for next year's Commonwealth Cup over six furlongs than they are for the Qipco 2,000 Guineas, but Hannon believes they have every chance to follow his former stable stars Canford Cliffs, Paco Boy, Toronado, Sky Lantern, Olympic Glory and Night Of Thunder by excelling over a mile.

According to the trainer, Gimcrack winner Threat could step up to seven furlongs for his final start of 2019, with the Group 1 Darley Dewhurst Stakes on October 12 among his options.

"They've both come back in good nick," said the trainer on Sunday. "Mums Tipple caused a bit of a stir and, as you'd expect, we've had a few inquiries. He's in another sales race at Doncaster next month, but I don't think we'll take that route. I'd say we're more likely to go to the Mill Reef or the Middle Park with him.

"I'd think for Threat we will look at the Middle Park or Dewhurst. When the dust settles we'll discuss it in more detail, but both horses are fit and well so it's a case of picking our spot and then waiting."

As for next year, Hannon added: "When you have very good three-year-old milers, they've always shown something at two – they don't come out of nowhere. That's what these two have now both done. They're two extremely exciting horses and we're very lucky to have them; let's hope we can do them justice.

"We've always thought Threat would turn into a very nice Guineas horse and he looked like he was doing his best work at the end at York.

"Mums Tipple does have a lot of speed but he's extremely straightforward and relaxed when he races, so I see absolutely no reason he wouldn't get a mile. If he doesn't get it we can always drop back to the Commonwealth Cup at Royal Ascot." 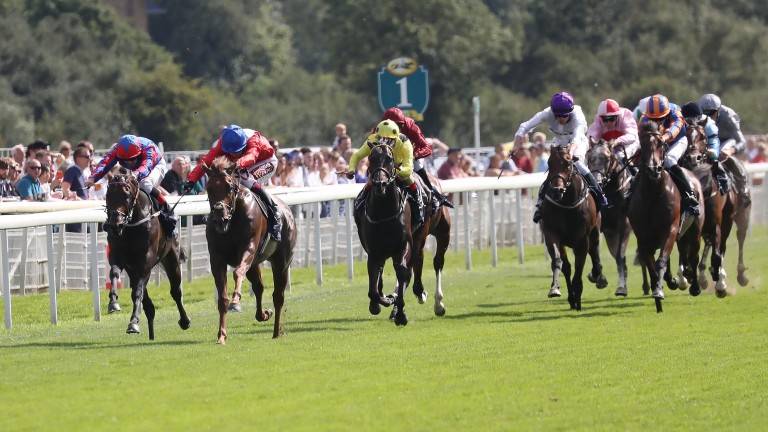 Threat, owned by Cheveley Park Stud, is a top-price 14-1 for next season's Commonwealth Cup and 20-1 for the 2,000 Guineas, while the Marian Lyons and Patricia Zanelli-owned Mums Tipple can be backed at 12-1 for the Commonwealth and at 16-1 for the Guineas.

For all they share a tremendous amount of ability, the stablemates have little else in common at home according to their trainer, who was left gobsmacked by the performance of Mums Tipple on Thursday.

"Threat is a little bit more imposing when he works," said Hannon. "Mums Tipple just does his thing, he's very relaxed and never really blows you away – he saves that for the track.

"I've never experienced a response like it at York, there was almost a fever surrounding the result and the horse. I don't think I've seen a two-year-old win like that for a very long time – even in a maiden."

FIRST PUBLISHED 4:27PM, AUG 25 2019
I've never experienced a response like it at York, there was almost a fever surrounding the result and Mums Tipple

Ruby Walsh: Faugheen's first defeat was my fault - I was trying to be too clever The Punting Club: submit your questions ahead of the weekend's Classic action Can any challengers defeat Aidan O'Brien's four-strong squad in Oaks Trial? 'The meeting was sure to be off. We were only coming here to have lunch' 'It's the dream more than ever now' - Menuisier eyes Arc with royal winner New Sky Bet Sunday Series to offer £200,000 in bonuses to owners and jockeys