Thomson: nothing to fear for Seeyouatmidnight 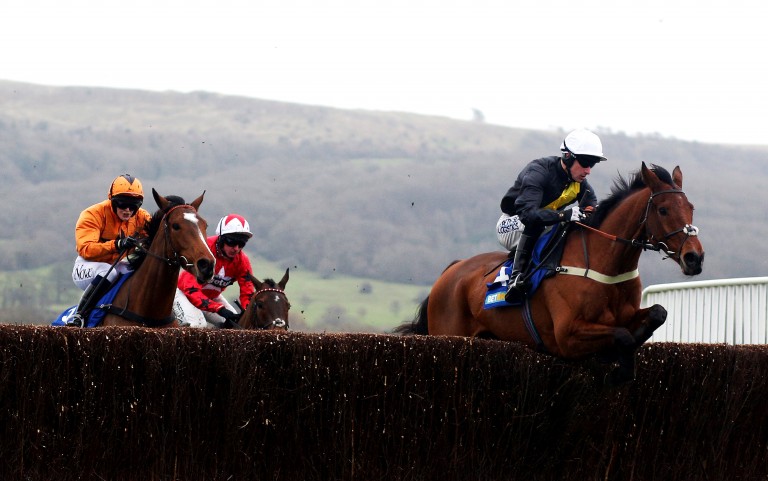 There will be no hiding place in Saturday’s Betfair Chase according to Borders trainer Sandy Thomson, but there is enough of a “chink” to think his stable star Seeyouatmidnight can serve it up to two of the highest-rated chasers in training.

Cue Card and Coneygree might be the headline names in the Haydock Grade 1 but Seeyouatmidnight has youth as well as match fitness on his side and, with more rain forecast before Saturday, conditions are likely to be perfect for the bold-jumping eight-year-old.

“You can’t be worried about it,” said Thomson, trainer of a team of 25 horses at Lambden Stables in Berwickshire. “You’ve got to go and have a go and if we’re not good enough, we’re not good enough and we’ll take it on the chin. But I feel he’s come on from last year and none of them are getting any younger.

"It would be a brilliant achievement if they could get Coneygree back to win a race of that kind and it’s possible, but there are chinks so let’s have a go.”

Seeyouatmidnight boasts a potent strike-rate of seven wins from 13 starts under rules, including four wins over fences, and returned this season with a striking success over highly regarded chaser Bristol De Mai at Carlisle last month, encouraging Thomson to take on the big boys.

“There’s no hiding place but we’ve decided to go and see where we are,” he said yesterday. “We’ll know after Saturday whether we’re going to be looking at Nationals or whether we’ll be going down the Grade 1 route.

"He did his last bit of work this morning and I’ve been delighted with him. If he was in the first three I’d be delighted and with a bit of luck I think he could be.”

Victory at Carlisle came on good to soft ground but Seeyouatmidnight is a three-time winner on heavy, so the 45mm of rain at Haydock in the past week and the forecast 20mm still to come is causing no concern.

Thomson said: “He surprised us at Carlisle but he’s won a Dipper on heavy and all ground comes alike to him really. I always feel softer ground would inconvenience others more than him.

"I always knew he was a bit special and it’s brilliant to have Brian Hughes on our side – he’s riding out of his skin.”

The ground at Haydock was soft, good to soft in places yesterday but clerk of the course Kirkland Tellwright is anticipating “at least” soft ground for the two-day fixture starting Friday.

He said: “There’s more rain to come and I’d expect us to be on soft when we race. We’re expecting rain each day, with up to 20mm to come and we might get 6mm on Saturday.”

There was "sustained each-way support" for Seeyouatmidnight with the sponsors yesterday, who trimmed his price to 7-1 (from 10) on their Sportsbook, although Betway stood firm at 10-1.

Betfair and Betway make Cue Card the 7-4 market leader, with Coneygree second-best at 9-4.

Champion jockey Richard Johnson gave the thumbs-up after schooling Coneygree yesterday morning but is still unsure if he will be free to ride last year's Timico Cheltenham Gold Cup winner when he makes his comeback from injury in Saturday's race.

"I really don't know," said Johnson when asked if he would take the ride. "The Bradstocks spoke to Philip Hobbs at the weekend to see if there would be an opportunity but it really depends.

"Menorah's in the same race and Philip has got runners at Ascot so it will be a case of Philip going through all the entries over the next couple of days and seeing how it works best.

"If we can it will be fantastic. He's unbeaten over fences and won a Gold Cup and whoever gets to ride him is going to have a fantastic ride for sure."

FIRST PUBLISHED 5:11PM, NOV 15 2016
There's no hiding place but we've decided to go and see where we are. We'll know after Saturday whether we're going to be looking at Nationals or whether we'll be going down the Grade 1 route