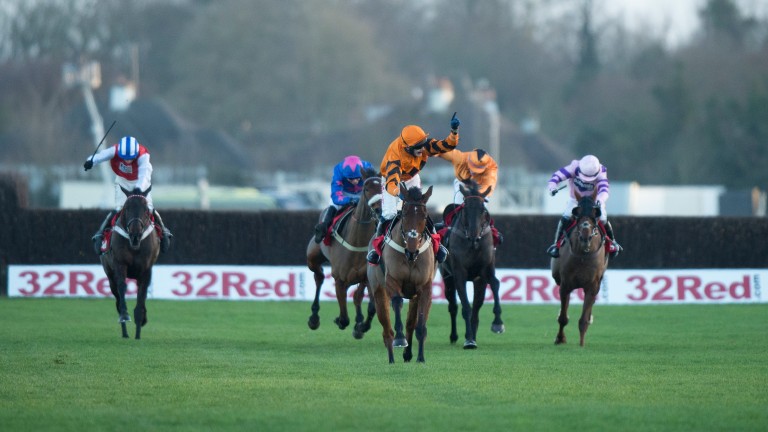 Thistlecrack (centre): Saturday's trial is on the Gold Cup course over a near-identical trip
Edward Whitaker
1 of 1
By Graham Dench 6:00PM, JAN 24 2017

Tom Scudamore insists the Thistlecrack camp are fully focused on Saturday's BetBright Trial Cotswold Chase and are not already looking to the main event at Cheltenham in March.

Thistlecrack, who will face an almost identical trip on Saturday as he will in the festival's feature event, is Coral's 1-2 favourite to land the Cotswold Chase, in which he could face Many Clouds and Silviniaco Conti.

The Grade 2, run over around a furlong short of the Gold Cup trip but on the same course, will be the highlight for many of a nine-race bonanza, which also features the rescheduled Clarence House Chase, and Scudamore is looking forward to it as much as anyone.

He said: "There are some decent horses in it, including a dual King George winner in Silviniaco Conti, but Thistlecrack is going to meet these good horses wherever he goes now. He's gone and done it in open company now, and you just hope for more of the same."

He added: "So far as I'm concerned the King George has been and gone now and I'm not looking any further forward than Saturday. That's his most important race and I want to see him win – I don't care how.

"I'll concentrate on the job in hand, and it will be nice to get more experience of Cheltenham. It was the Old course when he won his novice, and this will be the New course, the same as the Gold Cup."

Thistlecrack could face as many as ten rivals in the 3m1f Cotswold Chase, including former winners Many Clouds and Smad Place, who have dominated the finishes of the race's last two runnings, but he looks head and shoulders above his rivals, despite still being a relatively inexperienced novice.

The last horse to win the Cotswold Chase and Timico Gold Cup in the same year was Looks Like Trouble in 2000, but Thistlecrack's trainer Colin Tizzard is understandably upbeat about the chances of his nine-year-old, who is no better than evens in an odd place for March 17.

He said: "We'll take on whatever there is, and we wouldn't be afraid of anything. He's going for more Cheltenham practice and because after the King George where else would you go? This is the next step.

"He didn't have a break as such after the King George. He was back in full work after a week, just like any other horse. Tom came down to school him last week, but it was too frosty. We'll try again later this week when the frost has gone, but he'll just jump three or four to keep everyone happy." 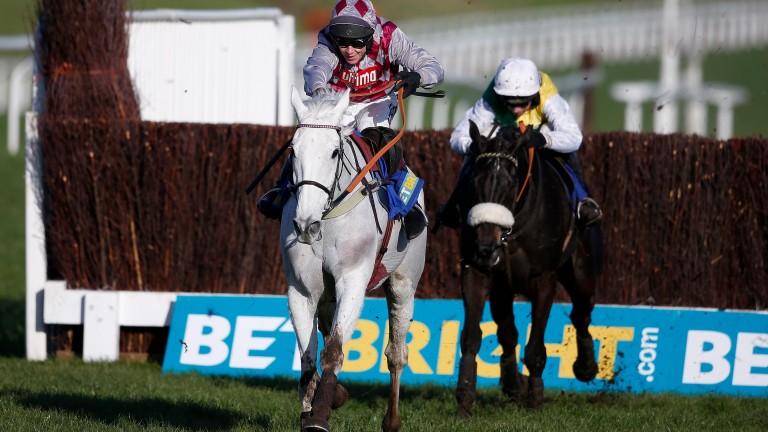 Smad Place and Many Clouds (right), first and second last year, could line up again
Alan Crowhurst
Oliver Sherwood is looking forward to Many Clouds' third appearance in the race and said: "Having won the race two years ago and been second last year it's very much the plan to run again. He had a little hiccup over Christmas, when his tracheal wash wasn't 100 per cent, but not going to Ireland was probably a blessing in disguise.

"He's been ticking over quietly, and he schooled last week and worked on Saturday. He's in great form and having been lightly raced so far this season he's raring to go."

Two of the market leaders for the JCB Triumph Hurdle, both owned by JP McManus, feature in a strong entry for the same sponsor's Trial, which opens the card at 12.00, with the Philip Hobbs-trained Chepstow Grade 1 winner Defi Du Seuil joined by Charli Parcs, who impressed at Kempton the same day and is trained by Nicky Henderson, who won this race and the Triumph with Peace And Co in 2015.

McManus also has a key entry in the Neptune Investment Management Classic Novices' Hurdle in Tom Lacey's unbeaten Kimberlite Candy, as well as a surprise entry in the Glenfarclas Cross Country Chase in Jonjo O'Neill's 2014 World Hurdle winner More Of That, who was last seen finishing a more encouraging sixth behind Outlander in the Grade 1 Lexus Chase at Leopardstown over Christmas.

FIRST PUBLISHED 6:55PM, JAN 23 2017
I want to see him win – I don't care how. I'll concentrate on the job in hand and it will be nice to get more experience of Cheltenham