Thistlecrack team give the green light for Kempton bid 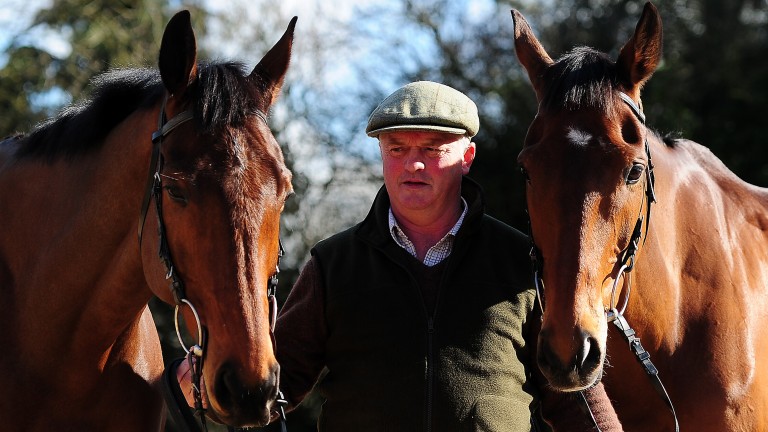 The gift that topped racing's Christmas wishlist was delivered on Monday when it was announced Thistlecrack would contest the 32Red King George VI Chase, in which he will go head to head with stablemate Cue Card.

In a move that has echoes of the Kauto Star v Denman rivalry that gripped the sport during the last decade, owners John and Heather Snook set in motion another inter-stable battle by committing Thistlecrack to the Boxing Day showpiece.

As a result, after just three chases Thistlecrack will bid to become the first novice to win Kempton's Christmas showpiece.

Last season's World Hurdle winner has made a highly impressive transition to fences but in Cue Card will be locking horns with the highest-rated chaser in training in Britain and a veteran of 26 chase starts in the first round of a duel that could be reprised in the Timico Cheltenham Gold Cup.

On Monday morning amid uncertainty over trainer Colin Tizzard's plans for Kempton, Cue Card was 10-11 favourite and Thistlecrack as big as 3-1 for the King George.

But once news of stable plans was out, bookmakers found the pair much harder to separate. On Monday night Cue Card was a top-priced 6-4 with Sky Bet and Ladbrokes, and Thistlecrack 13-8 with Betfred. The race sponsor went 11-8 Cue Card, 6-4 Thistlecrack and 12-1 bar the pair. 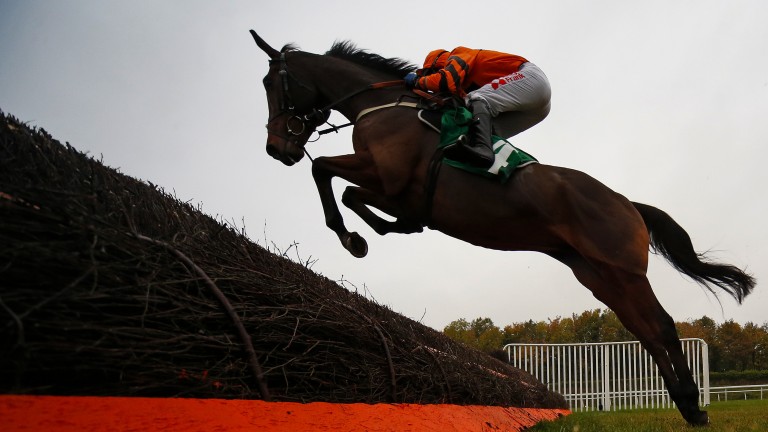 Seeing a stride: Thistlecrack makes the perfect shape over a fence in a pleasing chasing debut
Getty Images

Thistlecrack's jockey Tom Scudamore was thrilled by the news and fully endorsed the decision to spurn the Feltham Novices' Chase in favour of the King George.

"It's so exciting and I'm not at all surprised at the decision – I'm sure it's the right one," said Scudamore.

"I was asked my thoughts about it last week by the owners and we had a good chat about quite a few things.

"Once the owners had spoken to Colin I think they decided to give it a go. It was going to happen at some stage that he'd take on some of the big horses. They did have the option of going for the novices' race but this sort of challenge was going to happen eventually, so why not do it now?"

He continued: "He's very short odds for a race such as this but that is all irrelevant to me. I'm very positive about this and he's not a normal novice. For most novices this would probably be too much at this stage of their career, but this is a special horse.

"I'm confident they've done the right thing running him in the King George and I'm really looking forward to it. His jumping is already good and he's shown what he can do at home schooling with Native River."

Coming 24 hours after the defection of Coneygree, who won the 2015 Cheltenham Gold Cup as a novice, the news of Thistlecrack's participation was a massive shot in the arm.

Kempton clerk of the course Barney Clifford said: "It's absolutely fantastic. Colin said he'd leave it up to the owners and I'm delighted they've made the decision. We were disappointed to lose Coneygree but now we have Thistlecrack coming into it."

He added: "The ground is good, good to soft in places, and if we were racing today it would be very much on the good side. We've rain to come, probably up to 15mm before Boxing Day."

For 32Red, spokesman Tony Calvin said: "As sponsors, we're obviously delighted and thrilled in equal measure by this morning’s announcement that Thistlecrack will join stablemate Cue Card in the King George. It takes the race on to another level.

“This incredibly bold and sporting decision by Thistlecrack’s connections is a throwback to the days of Kauto Star taking on his next-door neighbour Denman in Gold Cups and elevates the race immeasurably as a result.

“The viewing and betting public want to see more clashes of this nature, and they have certainly got a race to savour now. These two horses don’t even work together at home, so we're all stepping into the unknown."

Thistlecrack's intended participation has made up the minds of Ar Mad's connections whose six-year-old will not be supplemented on Tuesday and will probably head for the Clarence House Chase at Ascot.