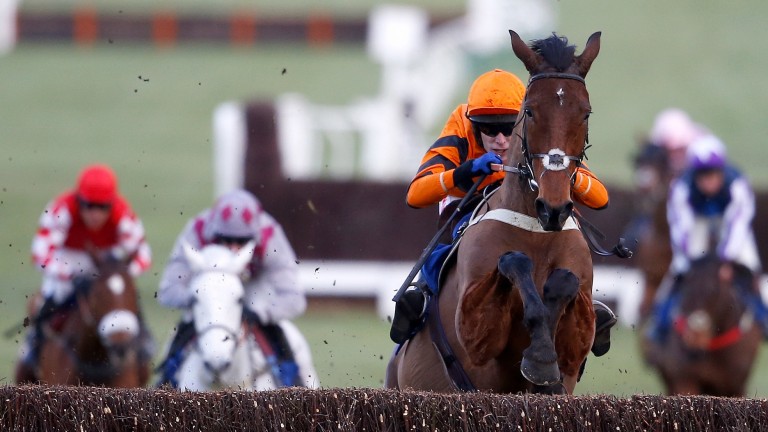 Thistlecrack remains the one they all have to beat in the Timico Cheltenham Gold Cup according to trainer Colin Tizzard, despite his star novice losing his unbeaten record over fences at Cheltenham on Saturday when the ill-fated Many Clouds narrowly landed the Cotswold Chase.

"He still deserves to be favourite," said Tizzard, reflecting on Thistlecrack's poignant defeat by Many Clouds. "He has opened the door a bit – but not much − for both Cue Card and Native River.

"The other two owners [Jean Bishop and Brocade Racing] have sat up a bit quickly when he got beaten!"

Bookmakers agreed on both counts as Thistlecrack was eased to as big as 9-4 (from evens) with BoyleSports, with Native River cut to 5-1 and Cue Card biggest at 8-1 with Hills.

Only last year's Gold Cup third Djakadam splits the trio in the betting at a general 6-1.

Thistlecrack's grip might have been loosened but Tizzard reported him none the worse on Sunday morning, a day after the epic duel with Many Clouds that cost the 2015 Grand National winner his life mere moments crossing the line.

"He was out this morning with the others and I don't want to take anything away from Many Clouds," said Tizzard. "With hindsight, it was tacky hard-working ground and he was outstayed by Many Clouds on that ground on the day.

"Going to the last it looked like he could win by a couple of lengths and it was a real battle up the hill – we were still 17 lengths clear of the third, though."

Tizzard is expecting a different story on expected better ground in over six weeks' time when the nine-year-old lines up on the Friday.

"The Gold Cup is the next stop," confirmed Tizzard, who also outlined plans for both Cue Card and Native River.

Hennessy and Welsh Grand National winner Native River remains on course to run in the Betfair Denman Chase at Newbury on February 11.

Cue Card, runner-up to Thistlecrack in the King George VI Chase at Kempton on Boxing Day, is set to put his Gold Cup claims to the test a week later in the Grade 1 Betfair Ascot Chase, a race he bagged in 2013 before going on to win the Ryanair at Cheltenham.

Stablemate Royal Vacation has put himself firmly in the RSA Chase picture with his eight-length win in the Timeform Novice Handicap Chase at Cheltenham on Saturday.

Tizzard said: "I was nervous about dropping him back to 2m5f as I think he's a three-mile-plus horse.

"He has progressed through his races and, although he wouldn't have beaten Might Bite at Kempton, he enjoyed jumping round Cheltenham and we will seriously think about the RSA as he has everything you want for that race. He stays and can be ridden prominently."