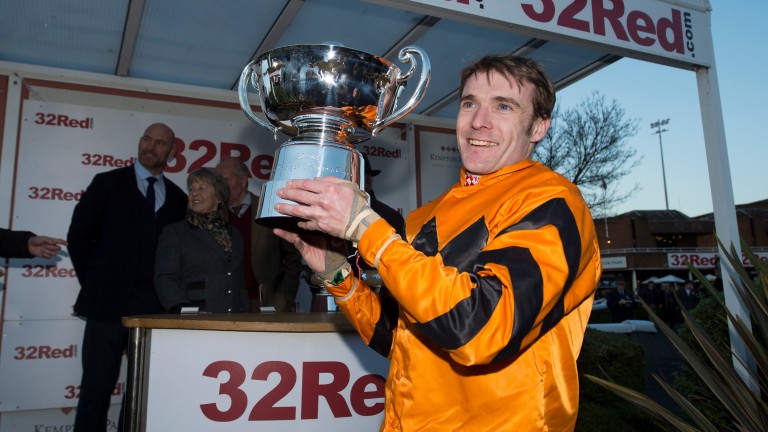 Tom Scudamore: "If a track needs to close surely it doesn't make sense to close one of the biggest and most historic racecourses?"
Edward Whitaker (racingpost.com/photos)
1 of 1
By Stuart Riley 7:01PM, JAN 12 2017

King George-winning jockey Tom Scudamore has added his voice to the legion of racing professionals opposed to Jockey Club Racecourses plan to sell Kempton to developers for £100 million.

"At first when I saw the news I was shocked, now I just feel angry. I just can't understand it, "said Scudamore, who partnered Thistlecrack to a blistering success at the course last month.

Scudamore, who has ridden over 1,000 winners, added: "If a track needs to close surely it doesn't make sense to close one of the biggest and most historic racecourses?

"One of the main reasons the Racecourse Holdings Trust, which was the former name of Jockey Club Racecourses, was set up in the first place was to save racecourses from closing down for development. It is desperate to be saying they have to close a track like Kempton."

"It's wrong on so many levels; most importantly the history and heritage of the racecourse. It's never been a course I've had loads of winners, though fortunately I have had Grade 1 winners there, but I grew up watching Desert Orchid winning King Georges there, I rode against Kauto Star when he won King Georges, and a few weeks ago I got to win the race myself on Thistlecrack. It's a place where some of the greatest jumping racehorses have their finest hours."

'How does racing benefit from this?'

Scudamore is well qualified to speak on the sport's history. He is the son of eight-time champion jockey Peter and grandson of the Grand National and Gold Cup-winning jockey Michael.

Speaking in his Coral blog, he added: "Racecourse Holdings Trust was set up in the 1960s specifically to safeguard racecourses, I think it started with Epsom, Kempton, Sandown and Cheltenham.

"During that period there were loads of threats to tracks. Cheltenham was in trouble at one stage, Aintree nearly closes, Sandown had bad times, they were all under pressure to be sold to developers.

"RHT started with a few big courses but they acquired more along the way, and that was to save them and protect them for the good of racing. And now the Jockey Club Racecourses has announced a decision to close Kempton, a decision that seems completely at odds with what they were originally set up to do.

"If this announcement had been made by Arc [Arena Racing Company] or another independent racecourse everyone would be going bananas, they'd be up in arms, and rightly so. So we need to make our voices heard and try and oppose this awful decision.

"If they can show us why this is the only way and it has to be done for financial reasons, well at least then you could understand it. But as far as I can see there has been no consultation, nobody has been shown the financial figures behind the plan, and we're just being told it has to be done to preserve the heritage of racing. Well, that's clearly total nonsense.

"The Jockey Club haven't come out with any justifiable reasons as to why this is happening. How does racing benefit from this? The overriding factor over every decision should be what is best for racing."

Dealing with the specific issue of moving the race, Scudamore added: "They've moved the King George to Sandown before and it worked okay but it's a different course to Kempton and becomes a different race, and a different test.

"In a year's time you can see Douvan taking on Thistlecrack around Kempton. It is the only place it would happen. The top trainers like Willie Mullins are happy to run their horses there. I don't think Vautour would have run in a King George around Sandown on soft ground."