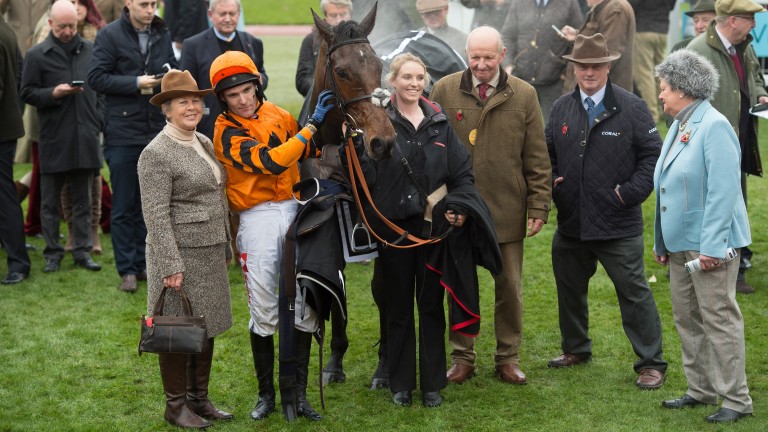 The possibility of Thistlecrack taking on his stablemate Cue Card in the 32Red King George VI Chase remains alive after connections signalled on Sunday there would be no quick decision over their Christmas plans.

Owner Heather Snook said she initially favoured the Feltham Chase at Kempton but was giving more serious thought to the challenge of the King George.

Trainer Colin Tizzard said he would try to reach a decision that was in the best interests of Thistlecrack, even though running in the King George would put at risk Cue Card's bid for a £1 million bonus.

Timico Cheltenham Gold Cup favourite Thistlecrack is as big 10-1 in the King George betting, for which last year's race winner Cue Card is 13-8 market leader after his victory in the Betfair Chase, the first leg of the Jockey Club Triple Crown.

Snook, who owns Thistlecrack with husband John, said on Sunday: "I haven't a clue what we'll do. There was nothing we could pick holes in yesterday and we will see how we all feel. We are lucky there are loads of options.

"I guess we'll stay at three miles and go the route everyone agrees on. I woke up this morning thinking Feltham and then I watched the race again and thought, actually, what's wrong with going out into open company.

"On Racing UK they were aghast he would go King George. Who's to know what we will do? The pressure will be on to make a decision but we have to make sure he's come out of it well and is in good order, which he seems to be."

She added: "We count ourselves so lucky he has come this far. We are all on quite a high at the moment. I hope we keep our feet on the ground, and Colin is grounded enough to speak for all of us." 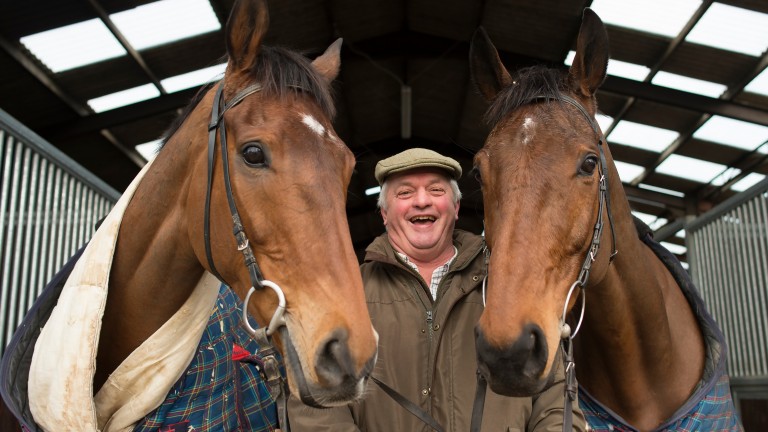 Colin Tizzard poses with his stable stars Cue Card and Thistlecrack at Venn Farm
Edward Whitaker
Thistlecrack produced his most impressive display over fences yet when dismissing Bigbadjohn by eight lengths in Saturday's novice chase at Newbury on another memorable day for the stable, during which Native River also captured the Hennessy Gold Cup.

Tizzard's group of quality staying chasers grows by the week and he recognises that keeping them from running against each other between now and the Cheltenham Festival may be not be straightforward.

"We'll take stock for a week or two," he said. "I am sure Thistlecrack will be declared at the six-day stage for both the King George and Feltham. The owners are the most important people so they most probably make the decision.

"I have to be fair to both sets of owners. In an ideal world you would have one in each but if Cue Card finished third or fourth in the King George we might think we could have won it if we'd run Thistlecrack.

"It's not an easy decision, so long as both sets of owners understand where I am. I have to do the best by both sets. It's something we'll be broaching with them in the next few weeks."

In winning the Hennessy Native River gave Tizzard a third potential Gold Cup candidate, and there may be another in the stable with the trainer disclosing that Alary, a new acquisition from France, will be trained for the race.

"Native River had a tough race and won't be wanting to go anywhere for a month," said Tizzard. "We will see what the handicapper does. Some say he should go up 10lb, I think he should go up only 2lb.

"I wouldn't have thought he'd run in the Welsh National but it's the sort of race he'd go very well in off his current mark. I would like to think we'll do what we can with him between now and March and run him in the Gold Cup. He's a thorough stayer and is the type of horse that's won the Gold Cup in the past.

"He'd be 20lb behind Cue Card but there are not many rated as high as Cue Card. What other race could he run in at the festival?

"Alary will run somewhere over Christmas. He's a lovely horse who seems to have settled in well. We've had him only a week. As a 160-rated horse we like to think we are going to get him to the Gold Cup. Hopefully we could keep the horses apart beforehand. He could even go to Ireland."

The trainer plans to run Viconte Du Noyer, who won on debut for the yard at the Open meeting, in the Betfred Becher Chase at Aintree on Saturday.

"Viconte Du Noyer could be our Grand National horse," he said. "He's a big strong stayer. He has been in top-grade races and his jumping looks strong so he'll go to the Becher. We will take it from there."

FIRST PUBLISHED 5:21PM, NOV 27 2016
I woke up this morning thinking Feltham and then I watched the race again and thought actually what's wrong with going out into open company