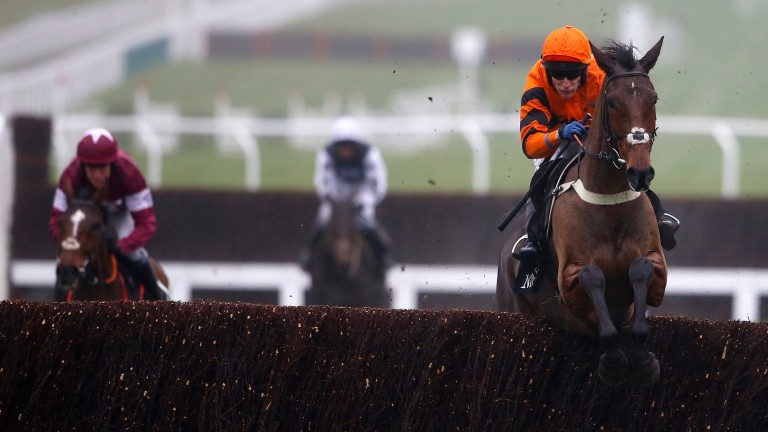 Hennessy day and an occasion to celebrate a fabled past, a staying-chase classic of the present and, courtesy of Thistlecrack, the fizz of the future.

But in the excitement and celebration that this three and a quarter miles of the Hennessy generates as top-rank staying chasers go that yard harder round one of the fairest tests in the land, an elegiac note must be struck.

The Hennessy was first run in 1957 at Cheltenham and won by Peggy Hennessy’s magnificent Mandarin, who won it again in 1961 – the year after the great race found its permanent roost at Newbury.

But today’s running is the last covered by Hennessy’s contract with Newbury and the longest commercial sponsorship in British racing is lying in the bed by the door, very likely soon to be carried gently off to the everlasting bonfire.

Next year it could be the Irn Bru Gold Cup or the Strictly Come Jumping Chase. I suspect after 59 years it will still be the Hennessy to many, just as the Mackeson survives in popular usage, though, with the exception of the Caribbean, you never see anyone drinking the ghastly stuff.

The Hennessy attracted the finest chasers in the lands from the start. A bad mistake cooked Arkle when Mill House beat him in 1963, but he won the next two before failing gloriously to give 35lb to the top-class Stalbridge Colonist under an inspired Stan Mellor in 1966.

This being the Hennessy, every soul that sings to staying chasers will have pet memories – Bachelor’s Hall took it as part of his unique Mackeson-Hennessy-King George treble in 1977, Burrough Hill Lad defied 12st that included 1lb of John Francome’s locks in 1984, and, ten years later, One Man’s victory sent the great grey down a false trail that led to brick walls up Cheltenham Gold Cup hills, until that magnificent day he dropped in trip and brought the festival to life by winning the Champion Chase – only for catastrophe to impale him at Aintree.

Denman's first strike in 2007 remains the most awesome destruction of a top-class handicap chase in my lifetime, and he rattled in a second two years later.

For sheer sentiment, the sight of Carruthers and Mattie Batchelor sent the place skywards as John Oaksey bred and part-owned him 50 years on from riding a barnstormer to bring Taxidermist from nowhere and stuff 'em on the line.

And just two years ago Many Clouds crowned the renaissance of Oliver Sherwood before going on to become the first Hennessy hero to win the Grand National.

Today’s likely favourite, Native River, fits the favoured second-season chaser profile so many look for, although some judges think last year’s novices were not an exceptional bunch.

Just chinned in the festival four-miler, Native River went on to Grade 1 honours at Aintree and has all the requisite toughness for the long slog up Newbury’s home straight. And his trainer Colin Tizzard is not having too shabby a season either.

RSA winner Blaklion is one of those who would go through a brick wall for you, and Vyta Du Roc, a blinding spare for the in-form Tom O’Brien, looks feasibly weighted and shone in his last proper piece of work at Seven Barrows on Monday.

Paul Nicholls could hardly have been more clinical in his assessment of Saphir Du Rheu, who he feels needs to move on from talking the talk to walking the walk off a mark 10lb lower than last year.

One of the most eyecatching gambles at the end of last season was the plunge on Henri Parry Morgan in the bet365 Gold Cup at Sandown, when he was sent off 5-1 favourite.

Going conspicuously well, he unseated Sean Bowen six from home, which was too far out to draw any strong conclusions. But both trainer Peter Bowen and his son retired hurt to Wales convinced a major one had just got away.

Winning this first time out is tough but not impossible, and there has been money for him over the last week.

Topweight Smad Place has the not-so-secret weapon that his out-in- front style and bold jumping can get any field at it, and when the weights came out Tom Segal, the judge’s judge, put him up ante-post to repeat last year’s success.

So we have a Hennessy worthy of its back catalogue that will be the very stuff of jumping.

Yet the big race, in possibly its final incarnation, has to share top of the bill today.

It is surely unprecedented for the current Cheltenham Gold Cup favourite to be running on Hennessy day, not in the centrepiece event but the novice chase.

But such is the excitement generated by the Tizzard-trained novice that he heads the Timico-backed Gold Cup market at 7-2.

The staying hurdle crown was rock solid on his head and Thistlecrack – foaled for a fence – has looked the part in his two chases to date with just a learning-curve lapse at a Cheltenham ditch.

He is the one today with the smack of greatness about him, and the thrill of the future lies in the slightly awestruck hands of Tom Scudamore.

Safe passage to all at Newbury on possibly the final afternoon when the nip taken in the cold air is one of brandy.

FIRST PUBLISHED 5:01PM, NOV 25 2016
Denman's first strike in 2007 remains the most awesome destruction of a top-class handicap chase in my lifetime