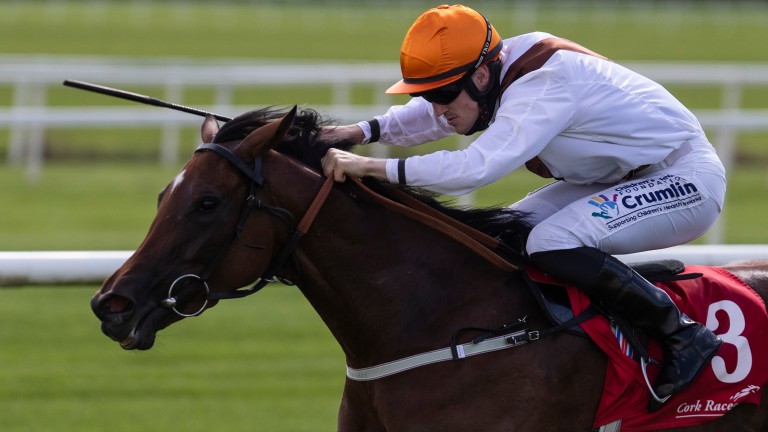 Pearls Galore: will be ridden by Billy Lee in the feature race at Fairyhouse on Sunday
Patrick McCann
1 of 1
By David Jennings UPDATED 9:48AM, JUL 11 2021

Valeria Messalina won the race last year and is back over her optimum trip. She is the joint top-rated and has a good draw in stall four, so there is every reason to think lightning can strike twice.

The 107-rated four-year-old looked menacing for a long way in the Duke of Cambridge Stakes at Royal Ascot but didn't appear to get home over a mile so drops a furlong, which is no surprise considering both her wins have come over seven furlongs.

Last year's race was loaned to Cork but it's back to its home at Fairyhouse now and Valeria Messalina looks sure to put up a brave defence of her crown under Shane Foley.

The big danger would appear to be Pearls Galore, who boasts an identical rating. She made giant strides last year and her first outing as a four-year-old was packed full of promise at Leopardstown when third to Real Appeal in the Ballycorus Stakes.

That should leave her cherry ripe for this, a race her trainer has had his eye on all season.

Soul Search is consistent but doesn't win as many as she should, while My Generation remains an unknown quantity. This will tell us a lot more about her.

Joseph O'Brien is triple-handed and perhaps the most interesting of those is Dilawara. She flew home and wasn't beaten far on her Irish debut in a Curragh handicap last month, and were it not for her wide draw in stall 14 she would be a fascinating contender.

Joseph O'Brien, trainer of Dilawara, Camdeboo and My Generation
My Generation is a Listed winner and we think she is well capable of being competitive at this level. Quick ground is important to her. She's probably better at a mile but we're still hoping she can get some more black type. Camdeboo is in good shape. She disappointed at Ascot on heavy ground so we're hoping she'll run well. Dilawara ran well on her first run for us at the Curragh but she's got a bad draw. We'll see how she goes and it would be great if we could get some black type for her.

Paddy Twomey, trainer of Pearls Galore
This race has been the plan for her all year. The trip and the ground will suit and I'm hoping stall one will be more of a help than a hindrance to her.

Jessica Harrington, trainer of Valeria Messalina
She won the race last year, but it was obviously at a different track and it's round a bend this time. She's got her ground here. She clearly didn't stay a mile at Ascot, so it's great to get her back over seven. Hopefully she can win it again.

Aidan O'Brien, trainer of More Beautiful and Elizabethan
The ground is the key to More Beautiful. She needs it good or quicker. She's very comfortable over six or seven furlongs once the ground is nice, so we're hoping for a good run from her. Elizabethan's early form this season was good. She's been a bit disappointing the last two runs but we're hoping she can bounce back here.

FIRST PUBLISHED 6:00PM, JUL 10 2021
She clearly didn't stay a mile at Ascot, so it's great to get her back over seven. Hopefully she can win it again