Henderson: this is when Altior is going to be most vulnerable 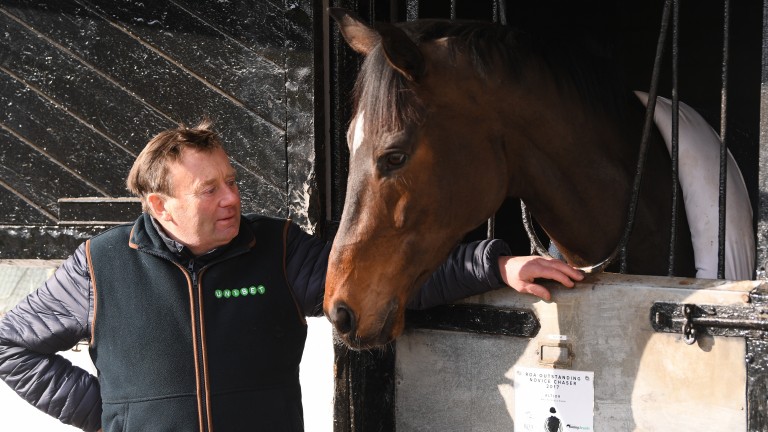 Nicky Henderson believes unbeaten jumper Altior could be at his most vulnerable when he makes his seasonal return at Newbury on Saturday from a ten-month absence and following wind surgery, but also warned his work has been "frightening".

The champion jumps trainer, speaking at a media function at his Lambourn yard on Tuesday, said he would have preferred one more week's preparation with last year's Racing Post Arkle winner, but, on the evidence of his schooling and exercising at home, expects him to produce a strong performance.

Altior will bid to win the Betfair-backed Game Spirit Chase for the second year. He beat Fox Norton by 13 lengths last season while still a novice and was receiving 5lb.

Fox Norton, who is rated just 2lb inferior to Altior, is among the entries again, as is Politologue, who won the Tingle Creek Chase that Altior missed in order to have his breathing improved.

Henderson said: "Altior can go through life unbeaten but it's unlikely and this is the time he's going to be most vulnerable. In the interests of trying to win the Champion Chase I think it's good for him to have a run.

"The competition is as good as it's going to be in March. Sometimes it's a pity to have the head to heads [before Cheltenham]. But I'd like to get a run into him and if he gets beaten he gets beaten.

"He's coming into a competitive race against fit horses. That's the danger, but in the interests of getting him to Cheltenham I think a race is the best thing for him. The timing's very good."

Altior was being prepared to return at Sandown in December when he made a "whistling noise" on the gallops and underwent a hobday operation as a result of which he may have only three runs this term.

"A lot of big prizes have gone by while we've been out of action, which is very boring, but there are big prizes still to come," the trainer said. "Aintree and Sandown are very close so really we're going to get only one more run after Cheltenham. Punchestown is the same week as Sandown."

Altior is on the verge of following former stablemate Sprinter Sacre into superstardom ranks if he can win the top prize at Cheltenham.

"Everything's gone so well in the last three weeks. What is frightening is he's working as well as he ever did. He schooled last week and was fantastic. He went ten furlongs this morning and was in great form. I'd be disappointed if we don't get a very good run out of Altior."

Henderson, who intends to run five in the Betfair Hurdle at Newbury as well as Morning Vicar in the bumper, Whatswrongwithyou in the novice hurdle and Reigning Supreme and Baden in the novice handicap chase, added that Timico Cheltenham Gold Cup favourite Might Bite will prepare for the festival via a racecourse gallop.

"It won't be at Newbury this weekend but he'll go somewhere in a fortnight," said Henderson. "He could have two racecourse gallops, though I doubt it."

While the Game Spirit has seven entries after being reopened, the Betfair Denman Chase on the same card has five – notably the returning Native River – while at Warwick the Betway Kingmaker Chase has attracted six entries, including the Willie Mullins-trained Saturnas.