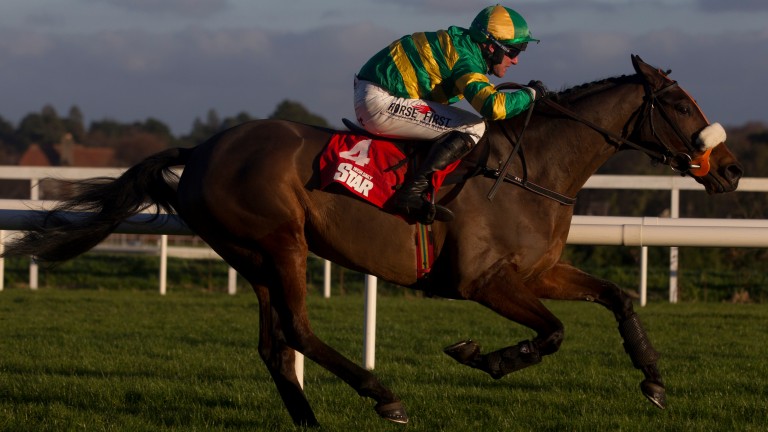 Thirsty Work is on a hat-trick as he steps up in distance following victories over two miles at Leopardstown and Navan.

Jessica Harrington, who trains the six-year-old for JP McManus, reports Mark Walsh's mount in good shape for the ten-runner event.

She said: "Thirsty Work did the job well at Navan last time, when he won by five and a half lengths, and we thought this race would be an ideal opportunity as the next step for him. He's in good form and we're hoping for a good run."

Duke Cass was upsides Thirsty Work when falling at the final hurdle at Navan last month and trainer Karl Thornton is expecting a bold show from his five-year-old, who before that mishap had won three in a row, including a handicap over this trip at Punchestown.

He said: "Our horse would have run Thirsty Work close at Navan. He was none the worse for his fall and is in very good order. He'll love the testing ground and the trip and we're looking forward to a big run."

Willie Mullins, who is represented by Livelovelaugh, the choice of Ruby Walsh, and Aussie Reigns, the mount of Paul Townend, said: "Aussie Reigns won his maiden over the course in December and will be going this distance for the first time. That shouldn't prove a problem but the ground will be slower than it was last time and I'm not sure how he'll handle it.

"Conditions won't be a problem for Livelovelaugh. He won his maiden over two miles five at Ballinrobe and will be dropping down in grade after runs at Grade 2 and Grade 3 level."

Carrig Cathal, who was brought down in a 3m handicap at Punchestown on Sunday, is a three-time hurdles winner, including twice over this trip.

His trainer Gordon Elliott said: "He came out of Punchestown fine and seems in good order so we decided to let him take his chance."

Henry de Bromhead is doubly represented with the twice-raced Conrad Hastings, who won a maiden hurdle at Tipperary in May, and Surf Instructor, who landed a 2m maiden here last month.

FIRST PUBLISHED 6:00PM, FEB 8 2017
He'll love the testing ground and the trip and we're looking forward to a big run