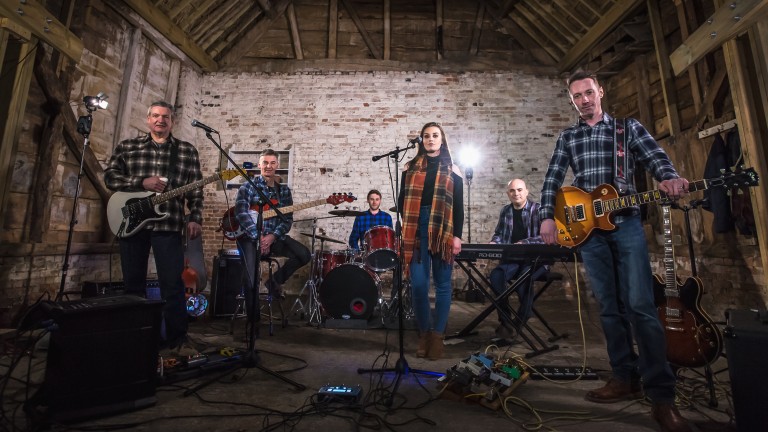 Lambourn band Uncovered has released its own version of Lean On Me to raise money for Racing Welfare
1 of 1
By Lee Mottershead 7:00AM, MAR 7 2018

Attempts to combine racing with popular music have not always been altogether successful but a fantastic charity will benefit significantly if the sport's new foray into the charts proves to be a hit.

Perhaps not surprisingly for people accustomed to dealing with racehorses on a daily basis, members of Lambourn band Uncovered turned to celebrated singer-songwriter Bill Withers, who duly gave them permission to produce their own cover of his 1972 classic Lean On Me.

The original, ranked number 208 on Rolling Stone's list of the 500 greatest songs of all time, was chosen because its lyrics marry perfectly with the mission of Racing Welfare, which will receive the venture's takings.

The song, available to download and stream now across all major sites, is sung by Gracie O'Reilly, a work rider and travelling groom for Oliver Sherwood, while one of the six-piece band's guitarists is Shaun Johnson, who has been employed in racing for 20 years and now travels horses for Daniel Kubler.

"I am very proud we are doing this for Racing Welfare," said band founder Johnson.

"It is a charity close to my heart. The idea for the song was triggered by some tragic events involving racing staff last year. Racing Welfare was there for the families and everyone affected.

"The title of the song and lyrics reflect exactly how I feel. Hopefully we can not only raise some money for the charity but also, crucially, increase awareness of what they do and how they can help people who work in the racing industry when things are going wrong."

Racing Welfare chief executive Dawn Goodfellow added: "Racing Welfare are honoured to have Uncovered supporting us with such an appropriate song. It is not only raising much-needed funds, but is also helping to publicise our services to those who need them."

This latest racing single has launched eight years after a number of racing professionals, including Sir Anthony McCoy, Nicky Henderson and Jessica Harrington, featured on a reworked cover of Petula Clark's iconic Downtown.

Sadly, the charity song, in which the word 'Downtown' was continually replaced with 'Cheltenham', failed to emulate the success of Miss Clark's celebrated version, in which jumping's premier meeting was mentioned not once.

FIRST PUBLISHED 7:00AM, MAR 7 2018
Hopefully we can not only raise some money for the charity but also, crucially, increase awareness of what they do