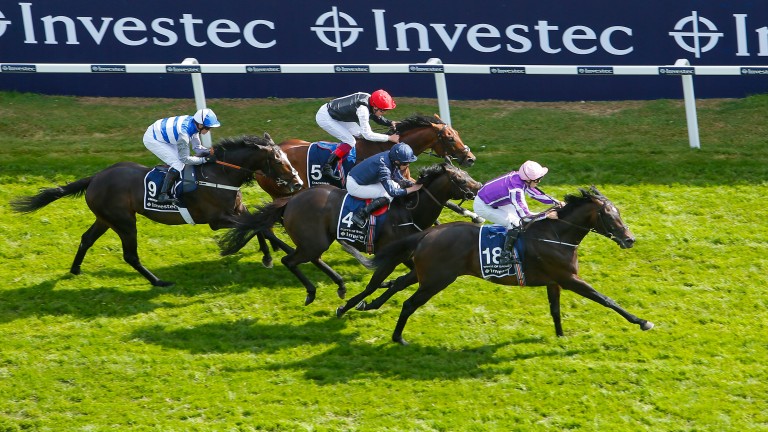 Who would you fancy in an Irish Derby rematch from Epsom?

Padraig Beggy, jockey I’d imagine there would be little between them again, but on the evidence of Saturday’s race, the way Wings Of Eagles finished it out so strongly, I think the Curragh should suit him really well.

Ben Curtis, jockey I would not look past Wings Of Eagles as he lived up to his name by flying down the outside to win. There did not seem to be too many excuses for any of the others and he beat two really good colts in Cliffs Of Moher and Cracksman, who had both run really well.

Jessica Harrington, trainer Cliffs Of Moher could be going for the Coral-Eclipse instead, but generally speaking there isn’t a lot to choose between him and Wings Of Eagles. On balance though I think Cliffs Of Moher is a more raw horse with scope to improve who will be suited by a more galloping track than Epsom.

Matt Hulmes, Betfred odds compiler The winner appeared to score on merit, but it would be a fascinating contest at the Curragh. I would perhaps side with Eminent who was niggled at the top of the hill but finished on the heels of the leaders. A conventional track would suit him better.

Eve Johnson Houghton, trainer If they go as strong a gallop at the Curragh as they did at Epsom I see no reason why Wings Of Eagles cannot confirm the form. Obviously Cracksman showed a bit of greenness and will improve, but I can’t see why Wings Of Eagles would not improve just as much.

What Derby runner further down the field do you want to keep onside?

Padraig Beggy I thought Douglas Macarthur ran a cracking race. He was in front for a long time and kept going until well inside the final furlong to be beaten less than five lengths. Capri also ran a very good race and will appreciate easier ground.

Ben Curtis Benbatl was the one who caught my eye as he could develop into a proper Leger horse come the autumn. He was only just behind the winner two furlongs out and stayed on well. A drop back in trip to 1m2f might suit Eminent.

Jessica Harrington Maybe Douglas Macarthur. If he is ridden with a little more restraint he should perform even better. He was hard at it early on and kept going well in the circumstances, so he could be a horse whose run could be upgraded.

Matt Hulmes Benbatl made huge strides from last to finish fifth and looks a serious horse if dropped to ten furlongs. Also the support for Dubai Thunder close to the off (16s into 9s) was eyecatching, and seeing as he is a half-brother to Farhh, he is one to keep onside. Perhaps lack of experience cost him on the day.

Eve Johnson Houghton The three I would take from the race are Cliffs Of Moher, Eminent and Permian. Cliffs Of Moher and Eminent look like Group 1 horses in the making, possibly dropping in trip to 1m2f. I have no doubt that Mark Johnston will do well with Permian. 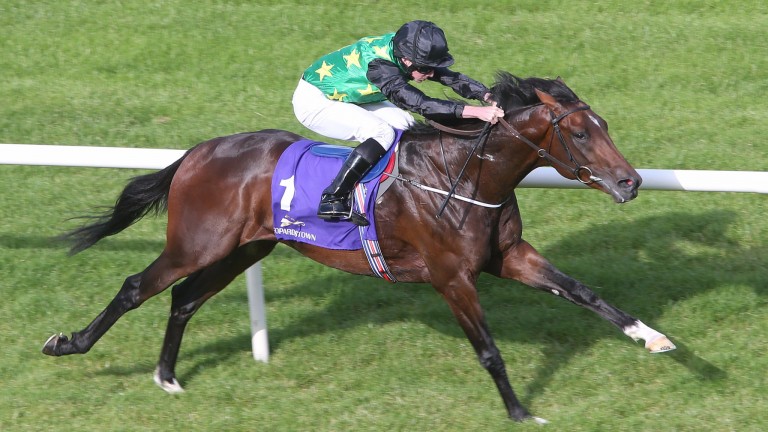 Douglas Macarthur: could be one of the beaten colts to take from the Derby
Caroline Norris (racingpost.com/photos)

How strongly do you rate Enable's Oaks win?

Padraig Beggy I was impressed with her when she won at Chester and even more so when she won on Friday. She’s high class and her time was very good. Rhododendron is a genuine Group 1 filly and she just came up against a very special filly on the day.

Ben Curtis She looks a thorough stayer who will be placed to maximum effect for the rest of the year. In my opinion over shorter than 1m4f she might be vulnerable, but at that trip or a bit further she will be hard to beat.

Matt Hulmes It has to be very strong. She put an extra nine lengths between herself and Alluringly on Cheshire Oaks form and had the right horse in behind to give the form a solid look. All eyes now shift to Shutter Speed’s Prix de Diane bid.

Eve Johnson Houghton Enable was very impressive and showed she clearly stays well. She could be a force to be reckoned with in all the top races over a mile and a half and even further this year.

Padraig Beggy I don’t see why not. He’s proved himself more than once to be a high-class performer over the distance. He’s very good, tough and genuine and from the time he arrived at Epsom it was less than an hour before he had the saddle on his back. To go out and put up the performace he did was pretty special.

Ben Curtis Highland Reel is a class act who, on the back of his Epsom win last Friday, will be hard to beat again in the King George at Ascot next month. He is the one they all have to aim at as he looks as good as ever.

Jessica Harrington It looks like it to me. The three-year-olds seem to be all much of a muchness, even on ratings, and I thought he was very brave at Epsom. I thought the Godolphin horse was going to sweep by him a furlong out so I was very impressed with how Highland Reel dug in and then went away.

Matt Hulmes I would say it was a competitive but sub-standard Group 1 Coronation Cup, but the winner did it the hard way just 70 minutes after arriving at the track. If the Jack Hobbs from Dubai turns up he’ll provide a sterner test, while Frontiersman could progress again to get even closer come Ascot.

Eve Johnson Houghton Definitely. He's been there and done it and I don’t think any three-year-olds will be able to match him if any take him on. Highland Reel is one of my favourite horses in training. He's so tough and loves a battle. 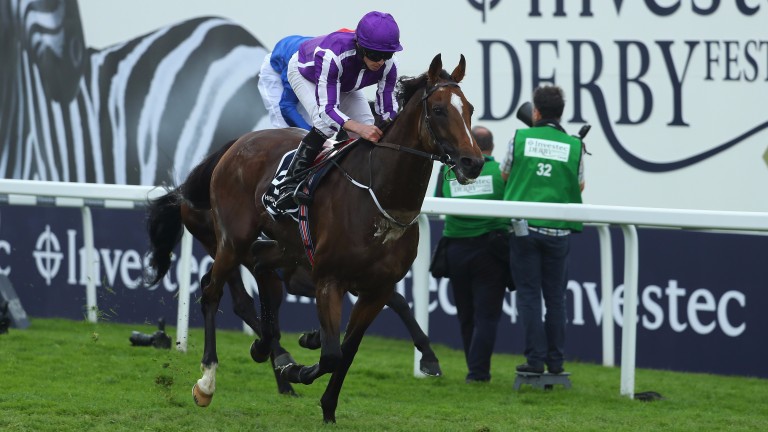 Padraig Beggy I wouldn’t be too sure. Ascot is only a couple of weeks away and a lot will depend on how horses who ran at Epsom come out of their races. It will be a tough ask for most of those who had hard races there.

Ben Curtis I think a major clue for the royal meeting emerged in the shape of Laugh Aloud, who could now head for the Duke of Cambridge after her solid win in the Group 3 Princess Elizabeth. She looked really impressive and will be hard to beat at Ascot and beyond.

Jessica Harrington I was impressed with Richard Hannon’s De Bruyne Horse on Friday and also with Godolphin’s Laugh Aloud in the Princess Elizabeth Stakes. I don’t know if they will go to Ascot but they will have options there.

Matt Hulmes G K Chesterton looks the ideal type for the Royal Hunt Cup after his impressive success, while Laugh Aloud looks destined for Group 1s and the Duke of Cambridge after bolting up in the Princess Elizabeth Stakes.

Eve Johnson Houghton The obvious one is John Gosden’s filly Laugh Aloud, who was impressive in winning her Group 3 on Saturday with her trainer nominating the Group 2 Duke of Cambridge for her at Ascot. Also Drochaid, who won the 1m2f handicap for three-year-olds, looks like he will continue to improve.

Who do you make of the whole Diore Lia affair?

Padraig Beggy Not a lot. I thought the whole business got too much publicity and there was a lot of silly talk in the week leading up to the race. In the end it was all for nothing as the horse didn’t run.

Ben Curtis Not worth talking about and never was worth talking about. It needlessly diverted a lot of the attention off the main event and was obviously one big publicity stunt. A rule should be implemented in the near future to stop this sort of thing reoccurring in the Derby and the other Classics.

Jessica Harrington People are entitled to run their horses where they want, but I think if you look at the conditions now for the Gold Cup, Champion Hurdle and Champion Chase, they have to have attained a certain rating. I think that makes total sense. I know you could run a maiden in the Derby and it could win, but it would make more sense to have minimum ratings for the top races.

Matt Hulmes Safety is always paramount for both horse and jockey and if the guys at the top of the profession voice concerns then they have to be listened to. Criteria now stands for both horse and rider for a Grand National entry so perhaps the BHA can look at a similar approach to the Derby.

Eve Johnson Houghton Maybe the BHA should make a rule that you have to have ridden so many winners to ride in the race. But would this have knocked out the winning jockey? It is a tricky question. Sadly it is not like National Velvet – we don’t live in a movie and, if they had caused an accident or injury to themselves or anyone else the sport would have been held up to even worse headlines. 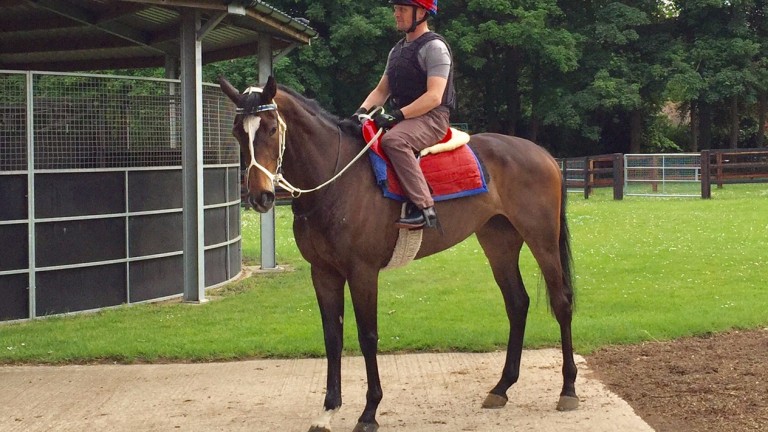 Diore Lia: whole issue of whether she should or should not have run in the Derby got far too much publicity
FIRST PUBLISHED 7:56PM, JUN 4 2017
She could be a force to be reckoned with in all the top races over a mile and a half and even further this year