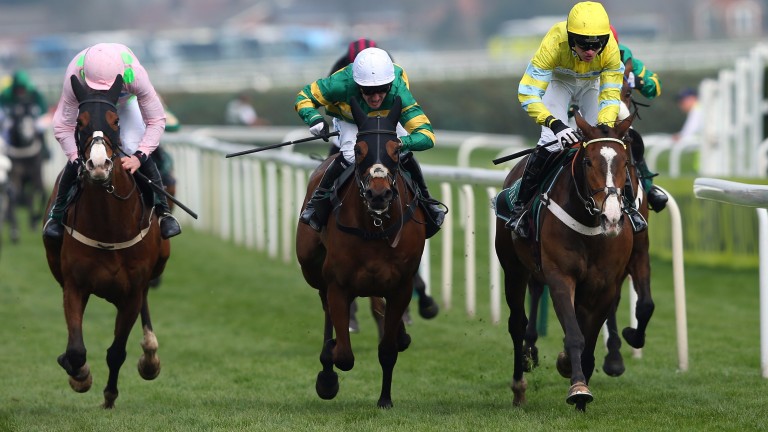 Plumpton and SIS have again found attracting potential Cheltenham contenders comes at a cost as the third novice chase carrying a bonus for going on to win a chase at the festival features just three runners.

The first two races this season carrying the lure of a possible £60,000 bonus put up by SIS for Cheltenham success in March each had just four runners, with Baron Alco and Top Notch justifying odds-on favouritism to put themselves in the frame to emulate Voy Por Ustedes, who landed the bonus with his Arkle win ten years ago.

Hopes were high Supreme Novices' Hurdle third Buveur D'Air would make his chasing debut in Monday's SIS Novices' Chase, but there was a late change of plan with the ground remaining good.

While Theo's Charm has yet to jump a fence in public, this will be a sixth chase in Britain for Theinval, who was third to Coral Cup runner-up Long House Hall in the Summer Plate at Market Rasen after winning his novice at Uttoxeter in May.

Henderson said: "Theinval loves good ground, which is why he's running. He has plenty of experience.

"The plan had been to run Buveur D'Air but we will wait a bit longer and regroup with him."

Nick Gifford had expected to take on Buveur D'Air with Theo's Charm but is under no illusion that Theinval is still a tough rival to overcome.

The Findon trainer had decided on the Plumpton race of his three entries this week, explaining: "The other options were to take on plenty of other good horses at Ascot on Friday and this gives a good opportunity for a nice introduction to fences and a clear round.

"Theinval has vastly more experience and we would prefer softer ground over this trip.

"It will be a cagey tactical affair and everything is in Theinval's favour with experience and ground."

Theo's Charm defends an unbeaten record at the track after two hurdle successes on heavy and soft ground last season.

He took his gallant second to Kruzhlinin in the Grade 3 Fixed Brush Hurdle on heavy ground at Haydock last month in his stride.

Gifford added: "He's been very good for Leighton [Aspell] and Tom [Cannon] at home, jumping nimbly and accurately. He's not exuberant but quick and in great form."

Amateur rider Oswald Wedmore is looking for his second career win under rules with rank outsider Grayhawk, having won on Loves Destination over hurdles at the Grand Military meeting at Sandown last season.

FIRST PUBLISHED 6:00PM, DEC 11 2016
It will be a cagey tactical affair and everything is in Theinval's favour with experience and ground