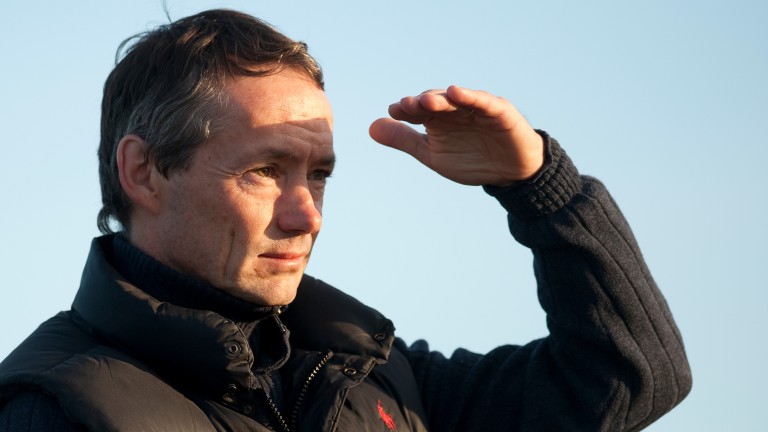 Cleeve Hill was the place to ponder the bad news on Tuesday morning. For of all the old sweats and young hopefuls who have galloped up between the gorse bushes two miraculous talents stood out, Pat Eddery and Walter Swinburn. Now, in little over a year, both are gone. The wind blows cold from the west.

Both of them spent crucial parts of their formative years scrambling up the western face of that Cheltenham escarpment with a posse that often more resembled a mule train than a string of racehorses. Frenchy Nicholson didn’t believe in sparing either his horses or his jockeys but his outward gruffness would break into boyish glee when he discussed Pat or Walter. “You just watch,” he would say of each in turn, “he could be as good as anyone. He can ride.”

As in all sports, class is as unmissable as it is undefinable. Frenchy saw it at once, as did Reg Hollinshead who took over the apprenticeship when Frenchy retired, as did Michael Stoute who took the wonderfully bold decision of signing Walter up as a teenager. It’s sloppy just to talk of Walter’s “hands” as explanation. He had an easy, athletic balance and flair, and an understanding of the horse beneath him that meant he was as relaxed and poised in the saddle as his cricketing contemporary David Gower was at the crease.

But as with Gower, it was the iron nerve beneath the deceptive ease that made him a big-match player. As a 6st slip of a boy he had dropped the winning goal that took Rockwell College through to the Munster Schools Cup Final four years before Shergar’s Derby in 1981. At Epsom on the big day, as a poignant ITV clip shows, he was phlegmatic to the point of monosyllabic as he shrugged off questions from an embarrassingly coiffed Brough Scott with the news that he had overslept that morning and that he was “going to ride the race as I find it”.

By then he had grown to a full 5ft 6ins and a bigger rugby player was straining to get out of the jockey’s body. It’s well logged how the battle with the scales would torment Walter down the years until he finally drew stumps in 2000 but on the big occasions he was always a master. He was still baby-faced when so daringly going up the inside and then between the leaders to win the 1983 Arc on All Along, a seasoned veteran when he oozed authority before nailing Singspiel in the final yards of the 1996 Breeders' Cup Turf on Pilsudski.

The big days could give him the adrenaline challenge he craved but booking WR Swinburn for Pontefract on a Monday might not have always been the wisest of choices. His very intelligence, charm and wider interests made him prone to other distractions not all as healthy as his golf and cricket, in which sphere he would proudly relate of having once bowled out living legend Garry Sobers.

Our worries about his dark times seemed to have been allayed when he married Alison and successfully took over the training licence from her father Peter at Tring. Seven years ago we walked the course at Epsom together and there seemed to be a serenity about him. He was fit and lean and 11st. He talked of his two daughters, he appeared on top of the training, and he loved the chance to remember the three Derbys he won.

He spoke of how “there were never any problems” with Shergar but of the relief when the post finally came. He recalled the planned attack off the bend that in my view made the 1986 Derby more the one that Walter won on Shahrastani rather than that Greville Starkey lost on Dancing Brave. But most of all he relished the triumph on once-raced Lammtarra in 1995 –  ignoring Sheikh Mohammed’s orders, dropping the colt in at the back, allowing him time to get balanced, getting out at the quarter-pole and then accelerating so that “right inside the final furlong he wasn’t just running on well and incredibly straight. I realised I was getting up. I won a length and a half. Of all my Derby experiences that is the one I am most proud of”.

That is also the memory of Walter I want to keep. Later the training ended and the marriage too. I saw him occasionally and he was as friendly as ever but there was a sense that there was something missing. Many tried to help but he seemed intent on doing things his way. The good fairy brought many talents to Walter’s crib but not them all.

It is the unhappiest of thoughts that the profession that gave him immortality may also have hurried his demise. Who knows to what extent the excessive behaviour involved in his wasting contributed to scars in his psyche? How much did that dreadful skull fracture in Hong Kong contribute to his subsequent epilepsy?

These are questions which we can but hopelessly worry over. I would prefer to walk again up Cleeve Hill, to remember where the magic first shone and to there recall the golden days when the racetracks were ruled by a lovely gifted man called Walter Swinburn.

FIRST PUBLISHED 11:08AM, FEB 10 2017
He was as relaxed and poised in the saddle as his cricketing contemporary David Gower was at the crease