The week in words: 'He describes himself as 'the maddest f***er on the planet' 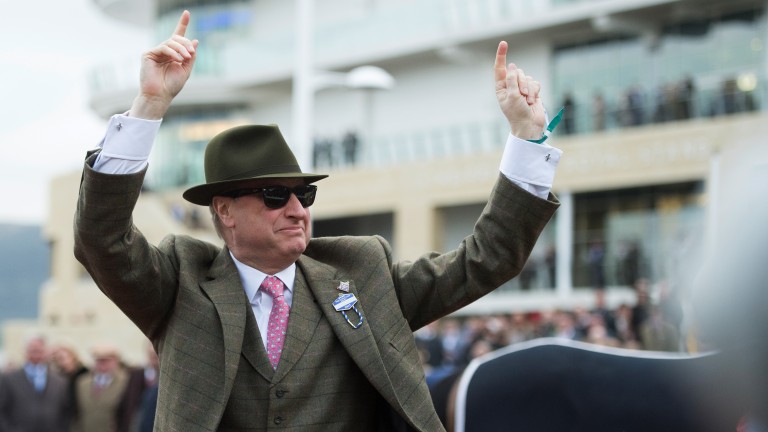 I can't quite believe what I've seen. This has been his target since I mentioned it at the owners' day in the summer!
Paul Nicholls was left stunned at the agonising last-gasp defeat of his Quel Destin by William Henry in the National Spirit Hurdle

QUEEN OF ALL makes it 2/2 for her owner/breeder Mr Jaber Abdullah winning the 4.05 @southwellracecourse by 3 1/2 lengths. Congratulations to @georgerooke_ riding out his 7lb claim #rhr #winners #traineronform #topofthehots #rabbahbloodstock pic.twitter.com/aeUdcnsE4E

It seems that, no matter which champions I trained or might be lucky enough to train in future, I will always be remembered more for having trained Double Trigger than for anything else. He captured the public’s imagination like no other animal I have been associated with, and rightly so
Mark Johnston pays tribute following the death of legendary stayer Double Trigger

When his horses race he never actually watches them and Joe [Chambers, a friend from his time at Barclays] has to tell him what's going on. He has some rather interesting eccentricities that most people don't have. He sometimes describes himself as 'the maddest f***er on the planet'
Michael Buckley discusses his friend and fellow powerful owner Rich Ricci in the Tuesday Profile

You will see Racing Post on my leg from the end of the week. There will hopefully be plenty of times I’m in the studio and writing for the paper, so there’s lots to look forward to
Richard Johnson reacts to news of his appointment as an ambassador for the Racing Post

B wondering what all the fuss was about on Monday #LadyButtons #KeepingWarm pic.twitter.com/5fcIIX9cms

His owner Peter Michael came up with the tactics; he suggested we try to nick a few lengths at the start if nothing wanted to go on, and Rachael executed them brilliantly
Henry de Bromhead credits owner Peter Michael and rider Rachael Blackmore after a rejuvenated Jason The Militant's surprise 25-1 victory in a Grade 2 at Naas

Hopefully they believe what I'm telling them, down to the point when I tell them their horse isn't very good and then ask them when they're going to start looking for another one!
Philip Hobbs stresses the importance of a strong relationship and good communication between owner and trainer

He was just a wonderful horse and that freakish enthusiasm never left him. Usually age tempers enthusiasm for everyone, but it didn’t with Un De Sceaux. He had it from the very start right up until the other day
Ruby Walsh looks back fondly on the career of Un De Sceaux, who retired on Friday

FIRST PUBLISHED 6:00PM, FEB 29 2020
Down to the point when I tell them their horse isn't very good and then ask them when they're going to start looking for another one!