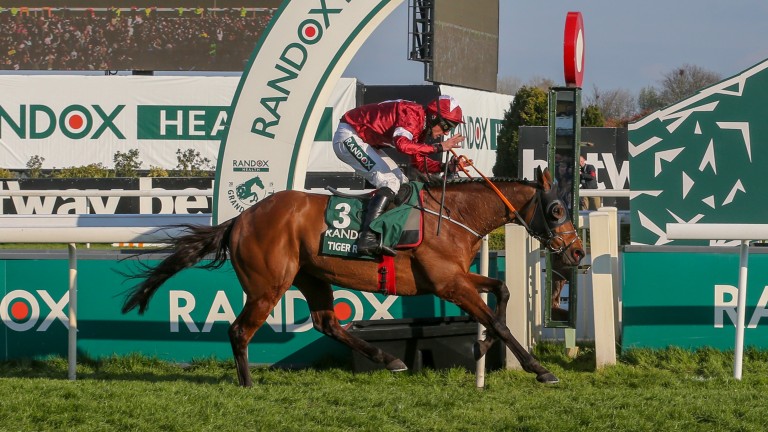 Will Tiger Roll feature in your Tote Ten To Follow?
John Grossick (racingpost.com/photos)
1 of 1
By Peter Thomas UPDATED 6:27PM, NOV 13 2019

There are some old friends that turn up on your doorstep after five years without so much as a postcard, and frankly they're a bit of a nuisance.

The Tote Ten To Follow competition is not one of those old friends. It's more of a great pal that you've missed very much since its unfortunate disappearance. In fact, you really can't wait to renew the acquaintance.

For many, the TTF was a low-cost mainstay of the punting season for two fascinating and infuriating decades. It was fascinating because it encouraged the racing fan to plumb the depths of his or her knowledge (which for some of us didn’t take all that long) to unearth those horses that would dominate the landscape of a season yet to unfold. It was infuriating because picking just ten horses to represent your expertise meant leaving out dozens more that held a major chance of kicking your prize-winning dreams to smithereens.

Now it's back, essentially unchanged except that it'll all be modern and digital, apparently, but don't let that put you off. It'll still be about using your skill and judgement to find the standard bearers of the jumps season, the emerging stars like my new favourite Eldorado Allen, or maybe those established campaigners with the wherewithal to make headlines again, so long as their owners give them the chance (yes, I mean you, Mr O'Leary, and your Tiger Roll).

You'll still have to come up with a balanced ten-horse team of novices and seasoned handicappers, slick hurdlers and gnarly long-distance chasers; and you'll have to place them well to plunder the list of bonus races and big pots that count for the most. But a guaranteed payout of £250,000 will make it worth the effort.

Make no mistake, this is a resurrection the like of which hasn't been seen since biblical times and I know there will be old-timers out there with grubby fivers already in their sweaty, outstretched mitts. Sadly, they will have to compete with a lot of young blood as well, I suspect, but bring it on. The TTF is back and for that punters should be truly thankful.